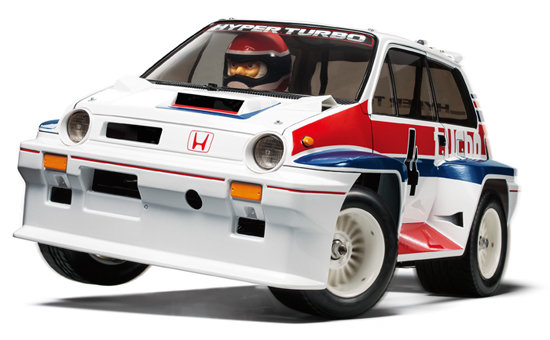 It’s summertime, time to go outside and play! Or, whip out those Tamiya paint cans and spray the plastic bodies of your favorite JNC model kits. Do it outside when it’s sunny and dry to avoid accidentally painting your furniture or carpet or, you know, getting poisoned by the fumes. Here’s a sampling of recent and upcoming plastic model kits that may be of interest to you.

Tamiya has been on a bit of a roll trying to flush your money down their toilet. Last year, they released the “Street-Custom” kits of their 1:24 scale Hakosuka GT-R as well as their venerable 1:12 scale Fairlady 240ZG, both including beautifully molded RS Watanabe wheels and other upgrade parts.

This May, they released the 1:24 scale Honda S600, a car that should require no introduction here. The 606cc four-carb DOHC inline-4 as well as the unique chain drives at the rear wheels are beautifully reproduced. You also get the choice to build this Honda classic with the hard and soft tops or none at all. Tamiya’s S800 kits have been out of production for a while and remain rather desirable, so better pick this one up while you can.

Surprisingly, Tamiya also released a new kit of the Toyoda AA, the first production passenger car from Toyota. In tact, original AAs are all but extinct, so Toyota built a replica itself for the Toyota Automobile Museum in the late ‘80s. Tamiya’s kit is heavily based on this replica, created using countless photographs as well as 3D scanning. It was even introduced on June 14 at the “Tamiya Plastic Model Meeting” held at the Toyota Automobile Museum. The body, interior, as well as the ladder frame chassis are beautifully recreated. Understandably, this is a curbside kit with no engine, but it does include an oldish-looking driver figure as well as the hood ornament with the old old school Toyoda logo in kanji. A neat kit of a historically significant car.

Springing forward half a century, Toyota introduced the 80-Series Land Cruiser in 1990 (making it a nostalgic this year!). Tamiya promptly produced a shrunken version with incredible detail. Depicting the top-of-the-line turbodiesel VX Limited, even the live-axle suspension was realistically rendered with working springs. A nice period touch is the box art showing the FJ80 in the unique red-on-silver two-tone dubbed “Adventure Road Toning.” This kit was briefly re-issued recently under the “’90s Tamiya Masterpiece” banner and is now being re-issued again. A companion “Sport Options” kit is also re-issued, containing an ARB-esque front bumper, beefy off-road tires, Deerfield wheels, a safari-grade roof rack, eye-catching “CRUISING” body side decal, and driving lights galore. What, no snorkel?

Going back to a Honda that would make Soichiro proud, Tamiya is re-issuing its 1:12 scale RA273. This is a rather significant model for Tamiya, being originally released in 1967 as the first kit in the iconic Big Scale series. A large and motorized kit, it was updated in 1973 with incredible amount of details added. It was re-issued in 1998 and re-boxed in 2007, adding metal and photo-etched parts. Now, it’s being re-issued again. The kit depicts Honda’s Formula 1 entry in 1966-67 powered by a 3.0-liter V12, a very strong engine at the time. The car unfortunately didn’t perform as well as the RA272 that gave Honda’s first F1 victory, which, if you must have, is available in 1:20 scale. The RA273 kit, however, is vastly more impressive and a piece of history in itself.

Keeping to the Hondas, here’s another one that got signed off by Soichiro: the Honda City Turbo. In 1983, Tamiya released a 1:10 scale R/C kit called Willy’s Wheeler, a wild, cartoonish, yet faithful rendering of the City Turbo as prepared by Mugen for the one-make race in the ’80s. A classic early Tamiya kit, it was discontinued by 1985. I’ve been waiting for the re-issue ever since. It’s now available, though with a new chassis, it’s not quite a re-issue. The body remains identical as the original, however, though it lost the “Willy’s Wheeler” moniker and the little Mugen decal on the rear hatch. Minor details. Just look at it, how can you not want one? 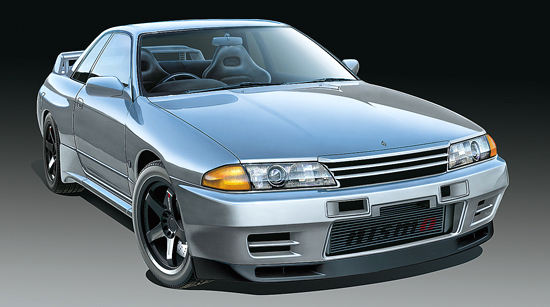 Last but not least, Tamiya is geared to release a 1:24 scale kit of the R32 Skyline GT-R dubbed “NISMO Custom.” Based on its R32 kit from which sprung endless versions of Godzilla racers, Tamiya adds a host of NISMO parts, including wheels, exhaust, strut tower bar, steering wheel, intercooler, upgraded turbo and intake on the nicely detailed RB26DETT. Nice treatment of this newly minted nostalgic. 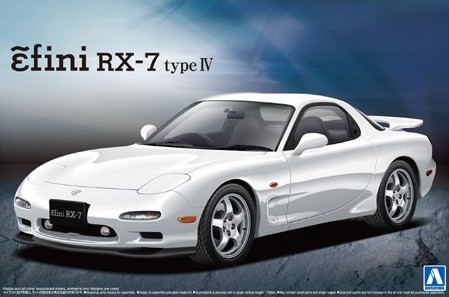 Turning to other Shizuoka-based model makers, Aoshima is also looking to turn your currency into plastic. First up, they are releasing the Series 7 RX-7 Type RS in 1:24 scale. This is the revision of the FD3S after it was discontinued in the US and consists of a “whale tail” spoiler, new 17-inch wheels, redesigned taillights featuring circular elements, and a slight power boost. This particular version of the FD has never been covered in 1:24 scale before. Though not strictly a nostalgic yet, the FD is viewed by some as a modern classic already, so we’ll give it a pass here.

What is indisputably a classic and a legend is the TA64 Celica rally car. Hailing from the Group B era, the Toyota Team Europe-prepared Celica dominated African rallies from 1984 to 1986. Victories at the Safari and Ivory Coast rallies all three years earned it the nickname “King of Africa.” This kit follows a string of collaborations between Aoshima and Beemax of Macau (China is quickly becoming a powerhouse in the world of scale models) that includes two ST165 rally Celicas. Other fruits of this collaboration include the S110 Nissan 240RS rally car from the 1983 New Zealand Rally and the EF Civic hatchback Group A racer. All three new kits are recently released as of July. 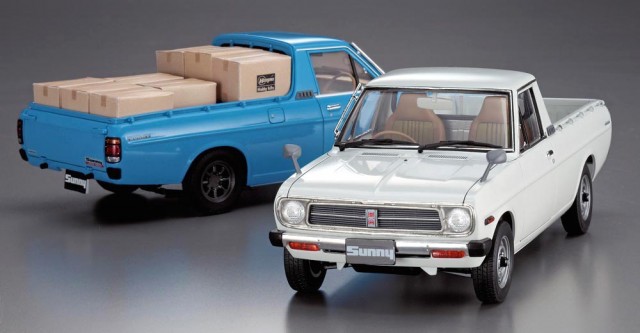 Lest you forget, Hasegawa, though smaller than its competitors, has released more than its share of scaled down JNCs. Hot on the trail of the Nissan Sunny truck it released last November, it’s now issuing the zenki version. A beautiful kit of a very cool truck that, had it been sold in the US, would’ve been dwarfed by the Datsun 620. 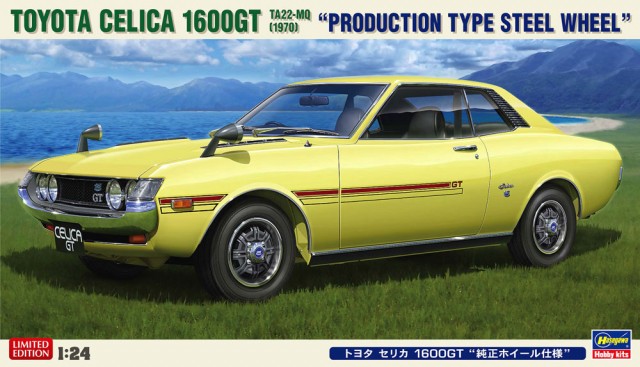 Another kit that should be of interest to many is the TA22 Celica 1600GT. Hasegawa has carried this car for many years in street and track trims, but this limited edition kit has the factory steel wheels for the first time. Beautifully molded, they even come with blue center cap decals with the Celica dragon logo. Topping it off is the gorgeous box art of a perfect TA22 in yellow. 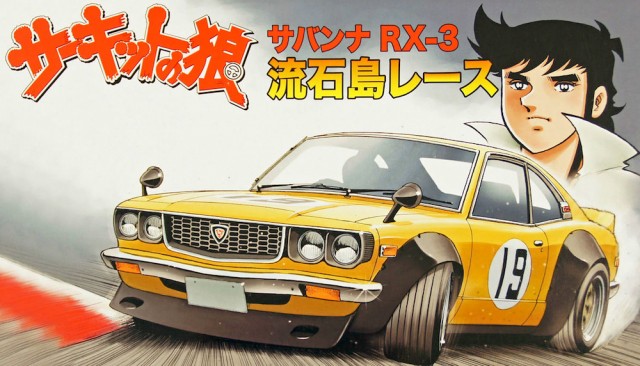 Surprisingly, Fujimi has not had the most jaw-dropping year as far as JNCs go, perhaps reflecting the fact that it’s covered so much ground over the years. A new item is the 1:24 scale kit of the Mazda Savanna RX-3 from the racing manga Circuit Wolf. Essentially identical to its Savanna GT Late Type Racing Version kit, Fujimi adds rondel decals and a very attractive box depicting a fender-flared and winged Savanna getting some opposite lock.

At this point, you might be thinking either “Shut up and take my money!” or “Why didn’t I leave my credit card in a cup of water in the freezer?” But at least it’s more fun than spending your whole paycheck in a certain grocery store. Happy summer!