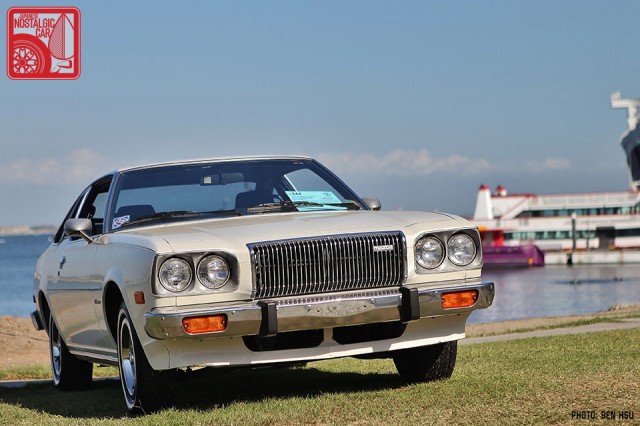 As we near the end of our 2014 Japanese Classic Car Show coverage, we delve into the crux of what it means to have a classic car show.  Here are some of the rarest and best preserved Japanese nostalgic cars you’ll see all year. 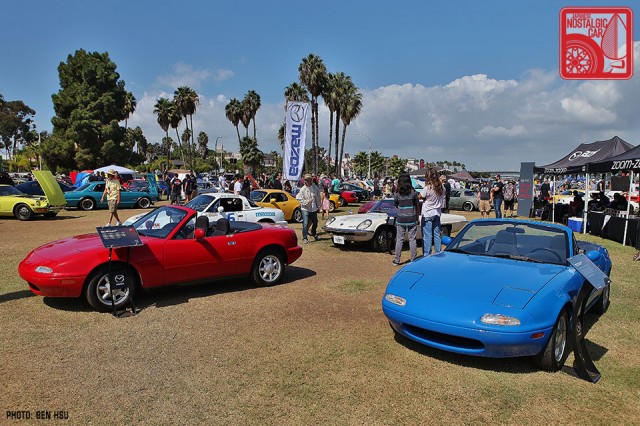 2014 marked the 25th anniversary of the Mazda Miata, and the Hiroshima automaker celebrated bringing out their entire fleet of first-gen MX-5s. While we’ve covered these Miatas — show cars,  concepts, and the original trio from the 1989 Chicago Auto Show — before, it was nice to see them displayed with Mazda’s first sports car, the 1967 Cosmo Sport, the first time all of them have been exhibited together. 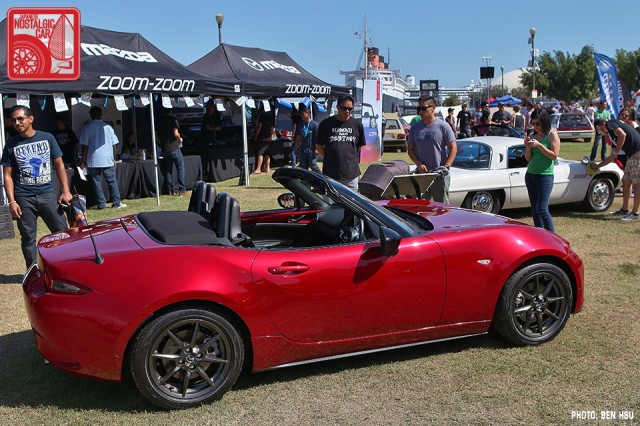 Mazda also gave the ND prototype its first public showing in in the backyard of the company’s USA headquarters here in SoCal, and the waterside venue at the Queen Mary could not have been more fitting for the best-selling open-top sports car of all time. 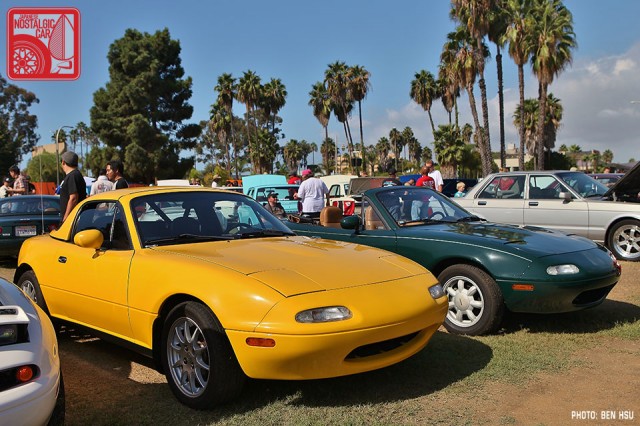 Since it was the first year Miatas have been eligible for JCCS, several exemplary privately owned examples entered. Eric Wong’s 1992 Sunburst Yellow was our favorite of the bunch, an original paint survivor in the rarest regular production color. According to Eric, it was one of 519 to come with the factory hardtop. Beside it was parked a beautiful British Racing Green with tan interior, one of many limited edition NAs.

Impressively, privately owned classic Mazdas knocked it out of the park this year with some super rare examples. Gerald Randon returned both of his two beautiful, bone stock Mazda RX-3 wagons.

We first saw Laren Blind’s Mazda 1976 Mazda RX-5 at SevenStock last year, and awarded it the JNC award at that show. It remains just as stunning as it did then, with only 69,000 miles on the odometer and two owners over the course of its 38-year life. According to Laren, only 47 1976 RX-5s are known to be registered in the US. 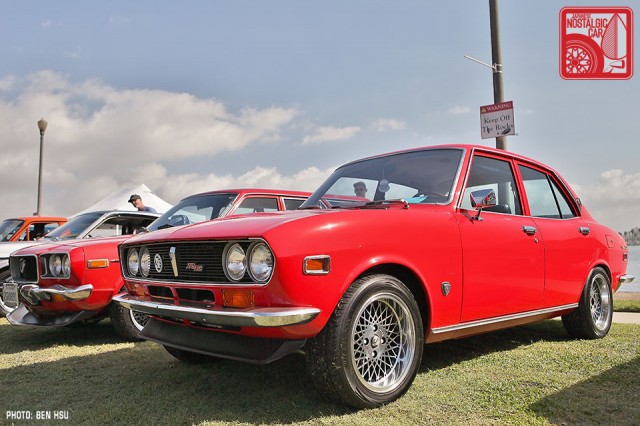 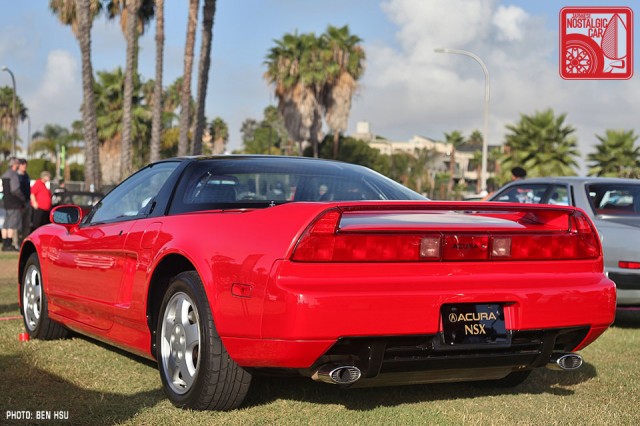 This was the second year in a row where Honda had a large official presence, on par with regulars Mazda and Toyota. On display in their corral were several modern race cars, but this all-original 1991 Acura NSX was simply breathtaking. It’s hard to believe, but Honda’s supercar is fast approaching the 25-year threshold. 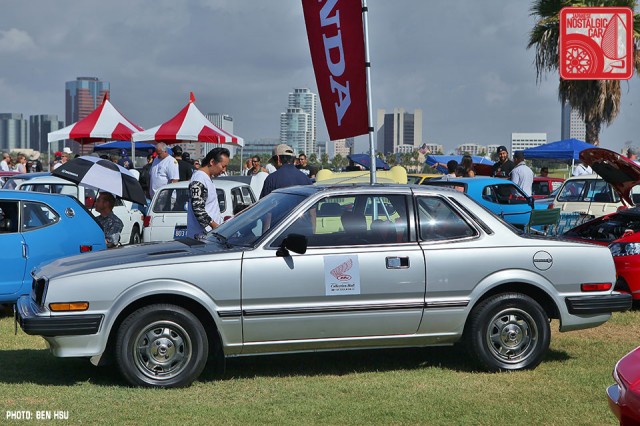 However, there are likely many mint-condition NSXes out there already. That’s why we were more blown away by the 1979 Honda Prelude from the company’s own collection. Examples in this condition, which can only be described as showroom-new, are certainly rarer than clean NSXes. It had less than 20,000 miles on the clock, and looked every bit the part. We’ll have a more detailed look at it next month. 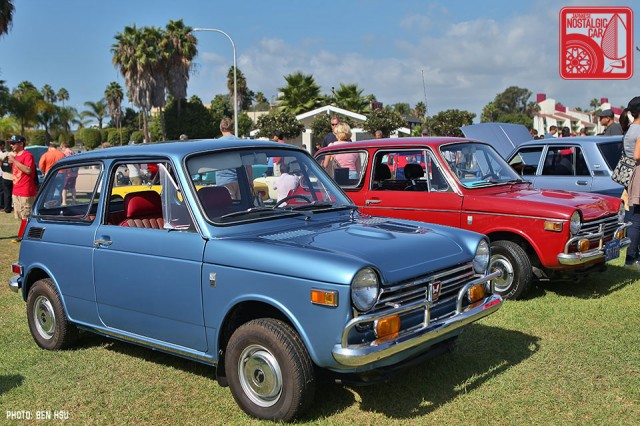 Privately owned Hondas came out in full force this year, with rows of N and Z600s, Wal Rashidi says that his 1972 N600 once “lived in the desert” and was nicely preserved enough that all he needed was a reupholstering of the seats to make it a fun driver.

Though not quite extinct, unmolested CRXes are an endangered species. Several first- and second-gen versions of Honda’s iconic sportster were present, including Chris Hoffman’s now-famous black Si, a couple clean Rio Red EFs in Si trim, and a clean Baltic Blue EC1.

Bread and butter sedans from other manufacturers rarely make a showing, but Accords are beloved enough to have several appear. In fact, a new class called Honda Mid School was dominated by Accords. Richard Maginn won first in the category with his Savoy Brown 1982 Accord hatchback. Robert Tirado’s silver 1978 Accord Sedan took second, and Robert Gallagher, who won third with his Type-R swapped first-gen in Part 04, is also the original owner of this 1986 Accord LXi  hatchback. Its orignal price in 1986? $11,928. 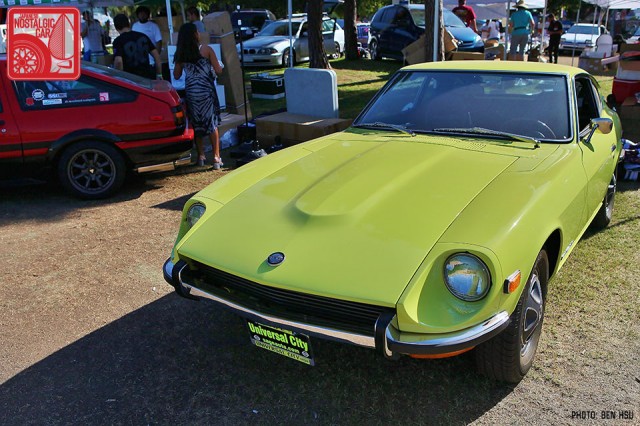 Unfortunately, Nissan doesn’t have an official presence at JCCS, so there are no cars to show from their collection. However, A beautiful 112 Yellow Datsun 240Z graced the booth of Universal City Nissan, one of the largest dealerships in the Los Angeles area. It opened in 1969 as a Datsun dealer. Imagine the fortuitousness of the timing, as that fall the best-selling hottest sports car of all time would make landfall int he US.

Mike Sage, owner of the dealership, brought his personal silver 1970 240Z. Aside from slot mag wheels, which were period correct and likely sold by his father’s dealership in 1969, it was bone stock.

Mike Nakawatase’s 1973 was resplendent in brown and a set of era-appropriate Enkei 92s, and William Gilbert’s 1978 Black Pearl 280Z was a fantastic example of one of our favorite special edition Z-Cars. Only 1000 were produced and it was the only time the S30 was painted black from the factory. Jay Ataka’s immaculate 240Z with Z432 wheels shows off the kind of meticulous work he put in while building the Datsun Z Sport Wagon. 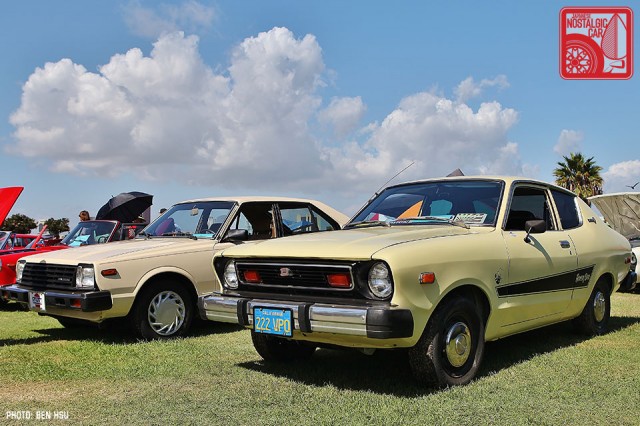 Zs and 510s certainly get most of the Datsun spotlight, but we were pleased to see some more obscure Datsuns have their day in the sun. David De Jager’s 1978 Datsun B210 Honey Bee was one of our favorites, a rare decal package (that bewilderingly, did not have the honeycomb hubcaps found on stock B210s) that was never available in Japan. We even like the big bumpers on it.

Nissan was seemingly on a mission to confuse American buyers at the time, because next to it was David Jones’ 1982 Datsun 310 GX, which is actually a N10 Pulsar in Japan. Don’t listen to the naysayers. Beige is beautiful.

Instead, the real B310 Sunny was sold as a Datsun 210 in the US, of which Alana Joy Gregorio’s 1979 is a fantastic example. It was purchased from the original owner in February of this year with just 66,000 miles on the clock. Making up for the lack of a clever name like Honey Bee, she has named it “Julie.” 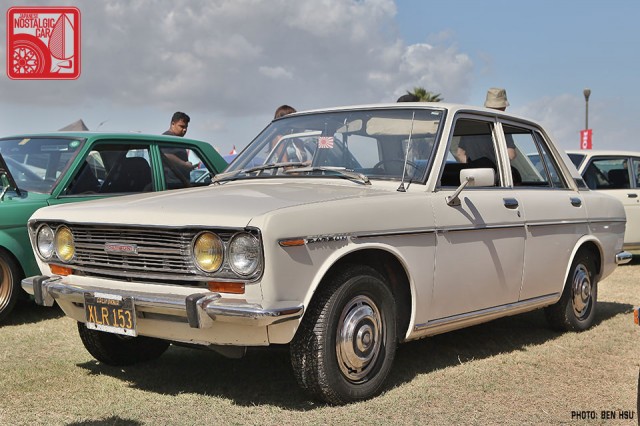 Carlos Flores’ 1968 Datsun 510 sedan has all the hallmarks of a perfect survivor. Not only does it have the coveted California black license plate, which went out of production in 1969 and thus not many JNCs have them, but also the chunky USDM door mirrors, lights and door ding deflectors. It’s a true time capsule of a rare early 510.

As we mentioned in the 80s installment, 2014 was the first for the JCCS costume contest. AJ Adler dressed up in a 70s-tastic ‘fro and porn-stache to emulate a Datsun B210 ad that was never used. His own 1978 B210 hatch is one of the cleanest original examples left, which we covered in 2012.

Susan Beley only recently acquired her 1977 Datsun 280Z, purchased solely out of nostalgia, a throwback to when she owned one in her youth. She and her husband won the costume contest hands down for their fabulous disco days threads.

Ryan Glass was the sole representative of the Daihatsu brand with his 1988 Charade. Its 52hp inline-three did not win it many favors at the time, even if it achieved 42 mpg. Sadly, after sales in only nine US states, it pulled out of the market in 1992, after just four years. Even in California, its biggest US market, it is impossibly rare to see them on the streets today, much less in such original condition.

A number of stock Toyota sports coupes have been showing up at JCCS in recent years. Add Richard Madriedejos’ 1971 Corolla Coupe to the list. This beige beaut is not a TE27, though it has the body of one. Instead, it’s the base TE25, which doesn’t have the metal flares or 5-speed transmission. However, it’s fantastic to see what a regular Corolla was like back in the day, and we hope Richard’s car is preserved this way for future generations. 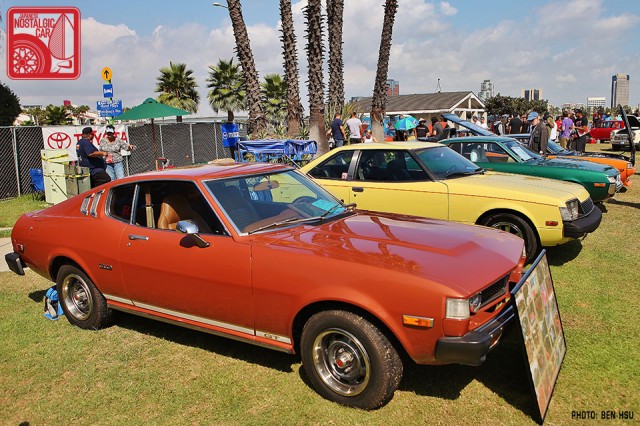 John Accardi is the original owner of his Toyota Celica GT Liftback, purchased new in 1977. We have nothing but admiration for the way he’s preserved over the course of 37 years of ownership. Parked beside it like a life-size Celica evolutionary chart was Gabriel Martinez’s yellow 1979 RA42 coupe. 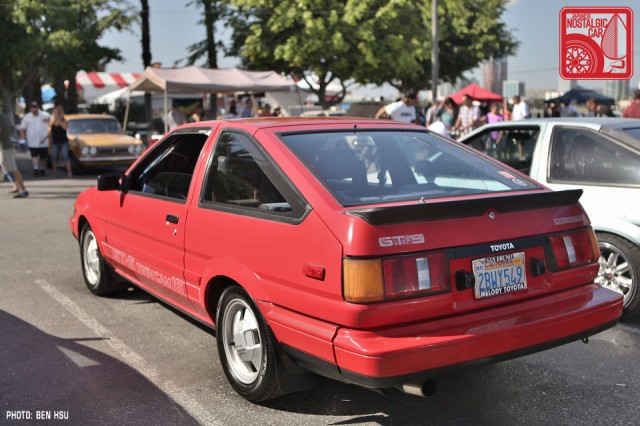 A 1985 Toyota Corolla GT-S survivor appeared at the show, wearing only a slight suspension drop and an aftermarket muffler. While in need of a minor refresh to clean up the paint and trim (and find that missing antenna), it’s one of the most original AE86s we’ve seen. We hope that it’s preserved this way and that the any future “drift sluts” are built from tattered SR5s. 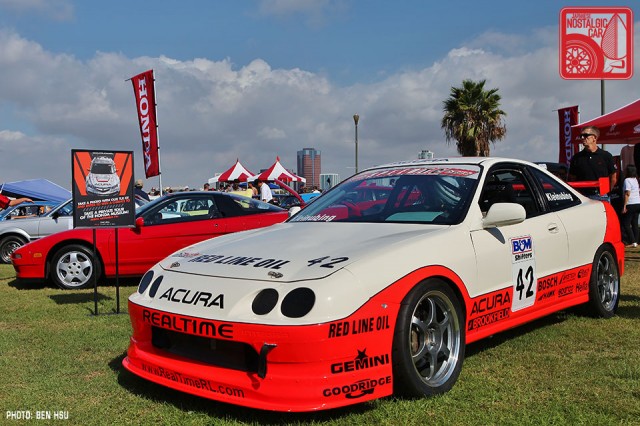 We thought it was cool that Honda brought Peter Cunningham’s RealTime Racing Acura Integra to the show. Those of a certain age will remember how Cunningham’s team, decorated in their white-on-neon-orange RTR livery dominated the World Challenge Touring Car series. 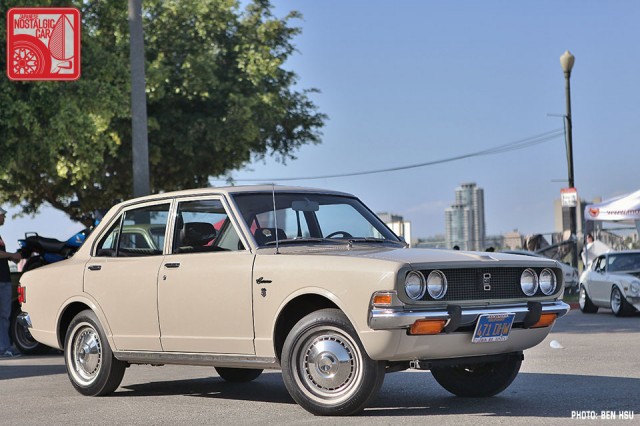 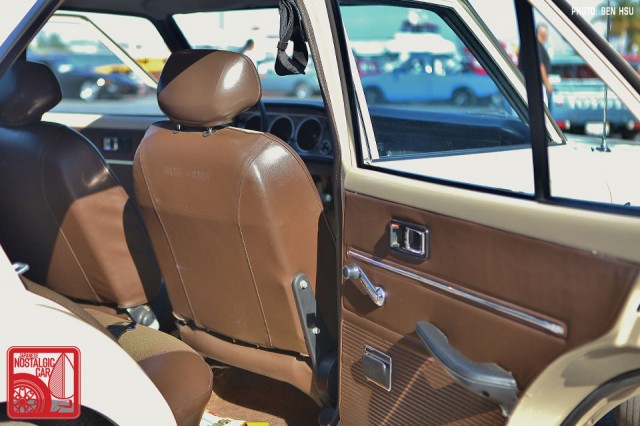 However, what really impressed us was that Cunningham is also the owner of this astoundingly original 1971 Toyota Corona sedan. Peter purchased it from the original owners in Auburn, California with just 47,000 miles on the clock, over half of which had been driverless, as it had been towed behind their mobile home. It’s as mint as mint can be, with remnants of the original plastic sheeting still clinging to the rear armrest. 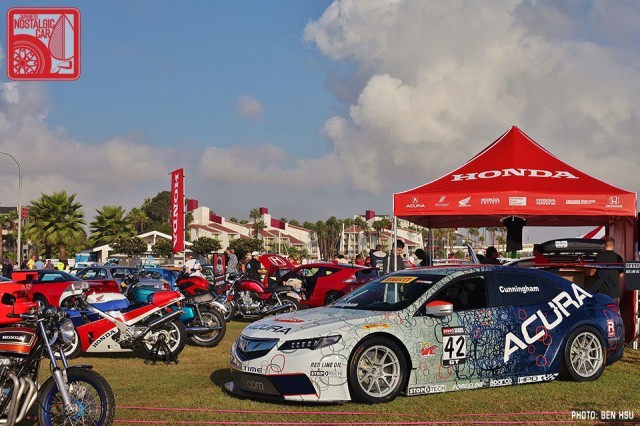 For 2015, Cunningham’s team will be campaigning a pair of brand new Acura TLXes, now with Acura-sponsored warpaint in blue and white. If you look at the hood and mirrors though, you can still see some of RTR’s classic orange and white. 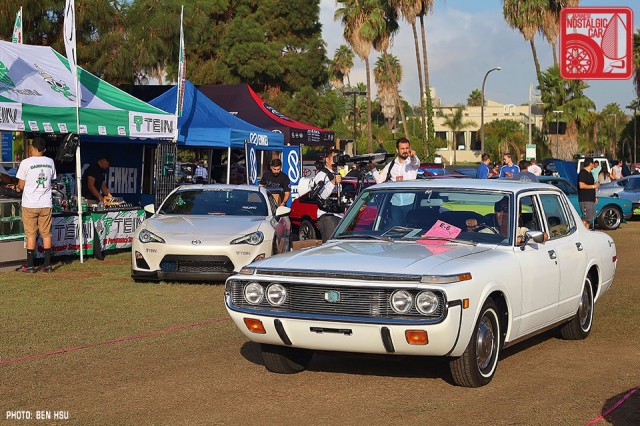 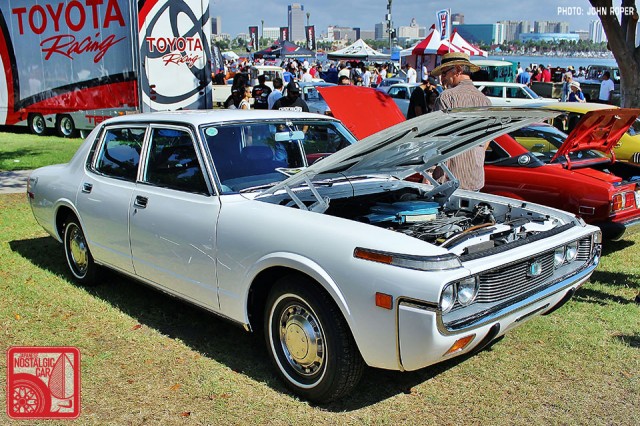 Moving up the Toyota sedan food chain, we come across Taro Endo’s beautifully restored 1971 kujira Crown. Even the stock 4M was rebuilt, rather than swapping with a modern Toyota M-series engine. Like the great white whale that became Ahab’s obsession, this was one of our absolute favorites from the show. 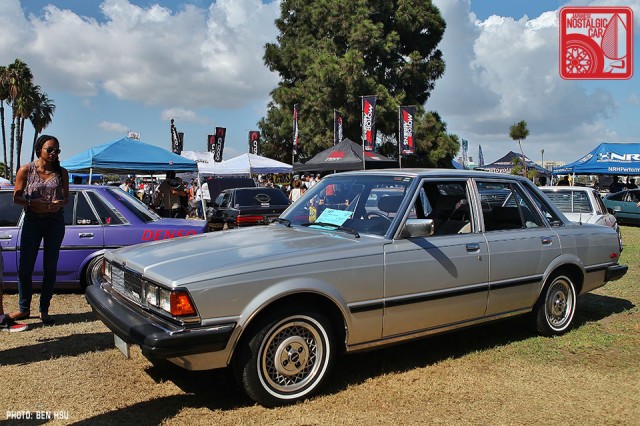 Over in the Cressida corral was James Duke’s immaculate 1981 sedan, exuding class and originality in every respect. They didn’t get enough respect when new, but we think Toyota’s flagships of this particular era have aged particularly well, better than its contemporaries. Not surprisingly, James took home the Best Cressida award. 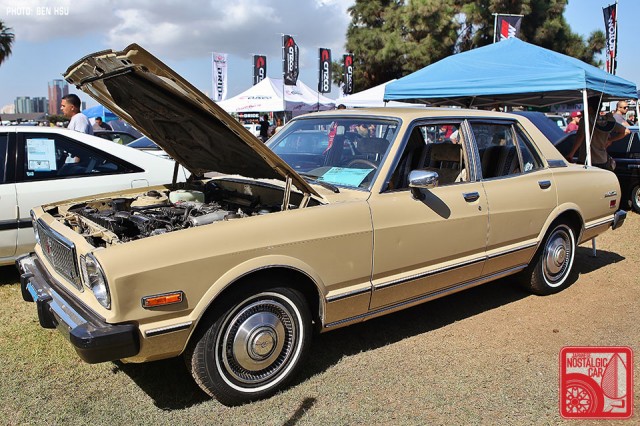 To be perfectly honest, we didn’t realize Christian Barron’s 1980 Toyota Cressida wasn’t stock until it was too late and the modified installment had already been published. Though it looks stock, the stock 5M has been swapped out with Supra Turbo’s 7M-GTE. We appreciate the fact that it’s a sleeper when the hood’s down. No one suspects a car with white-line tires and hubcaps.