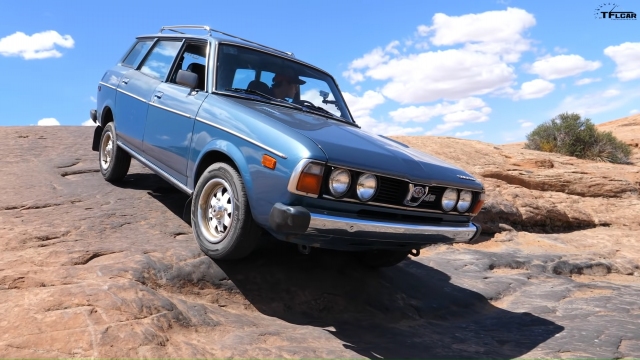 Moab, Utah is famous of its tough-as-nails off-roading obstacles, and normally one would not think of tackling them with anything less than a Toyota truck or Jeep. One owner of a 1978 Subaru GL, however, took his 42-year-old economy wagon with 67 horsepower way, way off-road. Surprisingly — or perhaps not for Subarites — the old blue workhorse surpassed all expectations.

You may recognize this 1978 GL Wagon from a video last week where The Fast Lane Car YouTube channel pitted it in an off-roading battle against its great-great-great-great-great-great-grandchild, a 2015 Subaru Outback. If you watched it, then you’re familiar with how surprisingly dreadful that Outback was, struggling to overcome its overheating CVT.

This time around, TFLCar decided to put the GL against a much more powerful opponent, the owner’s dad’s lifted Jeep Gladiator Rubicon. We won’t spoil the video for you, but we can say that the Jeep certainly had its work cut out for it. Watching the little Subaru take trails and rocks that would cripple many modern off-roaders makes you want to cheer for the little Subie that could. Rumor is, the Subaru’s next match-up is Ironman Stewart’s T100 in an exhibition race at the Baja 1000.