JCCS 2015: A tribute to legendary figures in Z-Car history 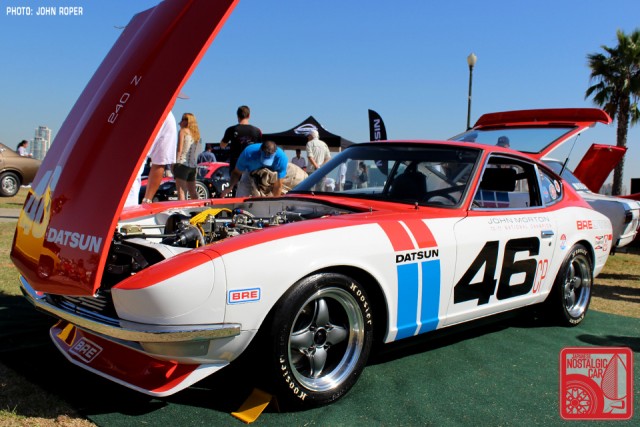 When it debuted in 1969, the S30 Z promptly redefined the sports car, tearing down any remaining barriers, psychological or otherwise, to owning a Japanese car. It became the first piece of Nihon steel you could own with pride in America, which set the Z on its way to become the best-selling sports car of all time. As such, it holds a special privilege among Japanese classics, sort of like a Corvette among fans of Detroit iron. And as with Corvette fans, some of them are downright obsessive. 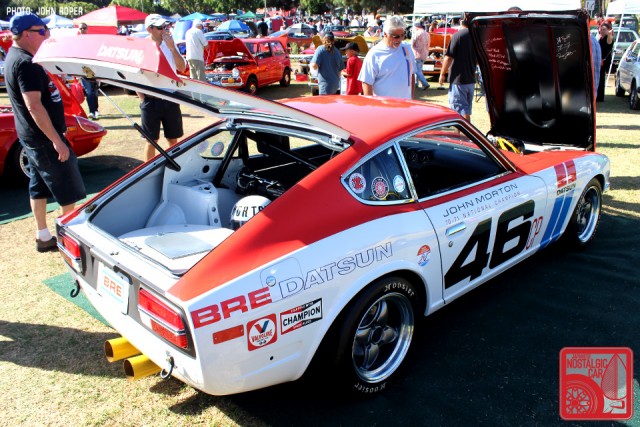 Of course, a big part of the Datsun 240Z’s fame stemmed from its success in racing. Right off the bat, Brock Racing Enterprises campaigned them in the SCCA’s C-Production class for the 1970-71 seasons. 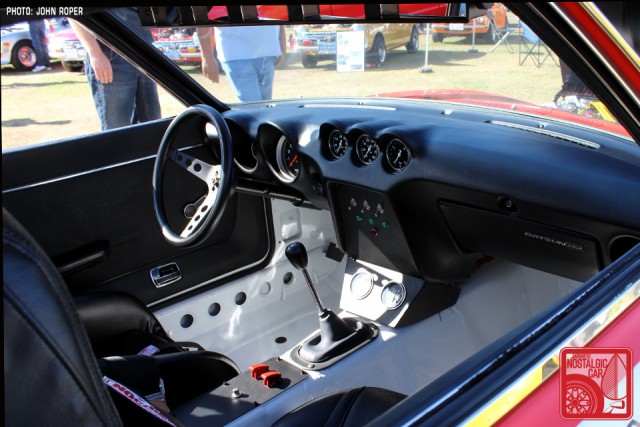 His star driver, a fearless John Morton, drove the Z to two consecutive championships and straight into the hearts of young enthusiasts everywhere, their memories seared with its iconic red-on-white livery sporting twin hash marks down its fenders. 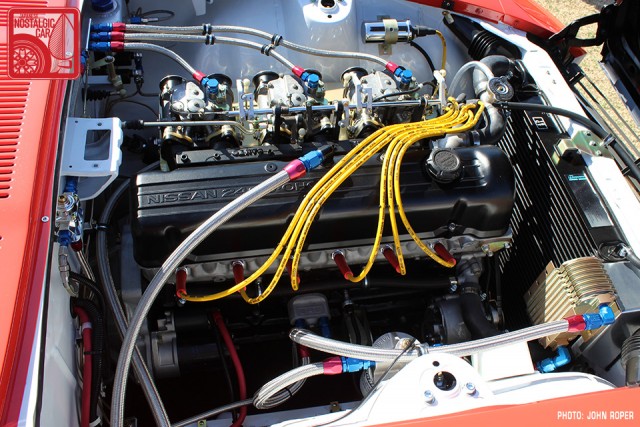 What kind of dedication does it take to build a life-sized replica of a race car that hasn’t existed in over 40 years? The original #46 car that Morton drove to victory was destroyed in a crash in 1973, so Randy Jaffe’s build required painstaking research, poring over vintage photos, and even searching out members of the original BRE team. 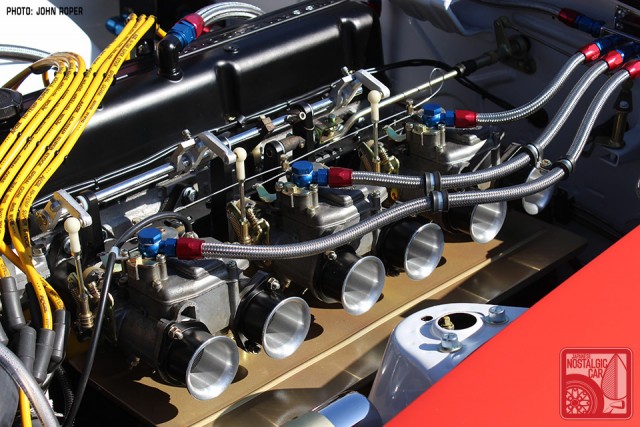 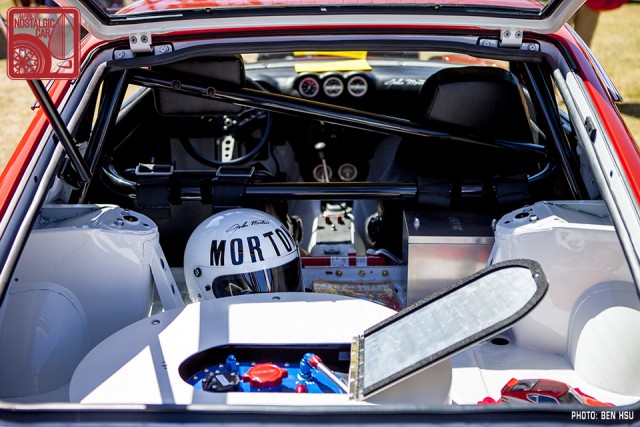 Peering into the trunk, one sees all all the attendant race equipment, like a roll cage, strut tower bracing, and a fuel cell built into the spare tire well. There was even an replica of Morton’s racing helmet. Naturally, John added his John Hancock to the dash.

After John stopped by the JNC booth, we accompanied him to Randy’s car so we could photograph his reaction to the replica. Needless to say, John was very pleased, as the car holds a special place in his heart. He still keeps the original’s number plate, the only piece of the car left, in a glass case in his office. 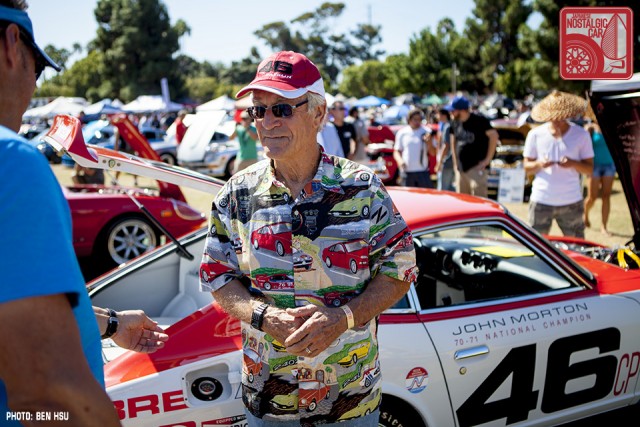 Opening the fuel filler door, Randy showed John that even BRE’s clever placement of the differential oil temperature gauge did not go unnoticed. “We used a Stewart Warner,” recollected Morton with a sly grin, memory still sharp as ever. “That’s what it’ll be tomorrow,” came the reply. For his efforts, Randy took home the Best 240Z award. 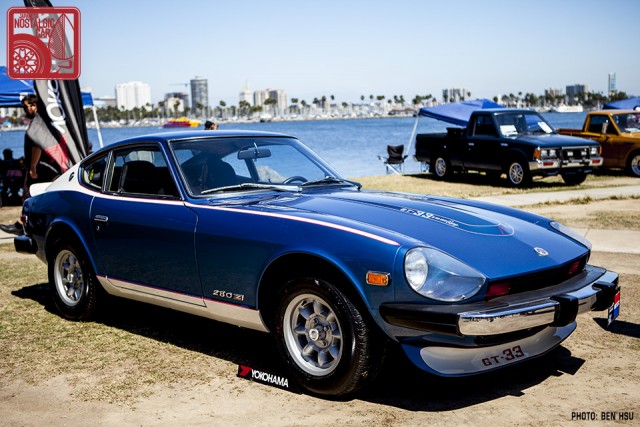 While BRE was putting the 240Z in motorsports history on the west coast Bob Sharp was doing the same on the east coast, winning consecutive C-Production championships in 1972-73. Sharp became a Datsun dealer in his home state of Connecticut, and in the mid-1970s began producing Z-Cars with special option packages to sell at Bob Sharp Motors.

Restored by Jay Ataka, this particular 1975 280Z is one of the few surviving cars, with only 23,000 miles on the odometer. Sharp called this package the GT-33, based on his racing number, and it included custom paint, a front and rear spoilers, thicker sway bars on both ends, Minilites, Koni shocks, Cibie headlights and clear headlight covers, headers and exhaust, and a 3.9 limited-slip rear. 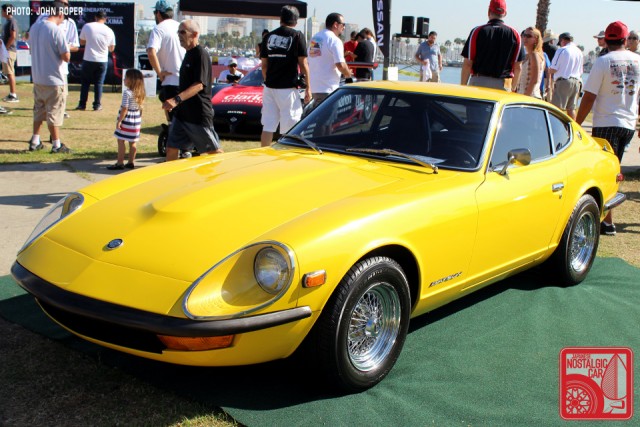 JCCS regulars will recognize the custom yellow Datsun 240Z once owned by none other than Mr K himself, Yutaka Katayama. The former president of Nissan USA had his personal car fitted with a G-nose from Japan. He owned the car until he retired his post in 1977, and gifted it to his secretary, Johnnie Ueda-Gable. 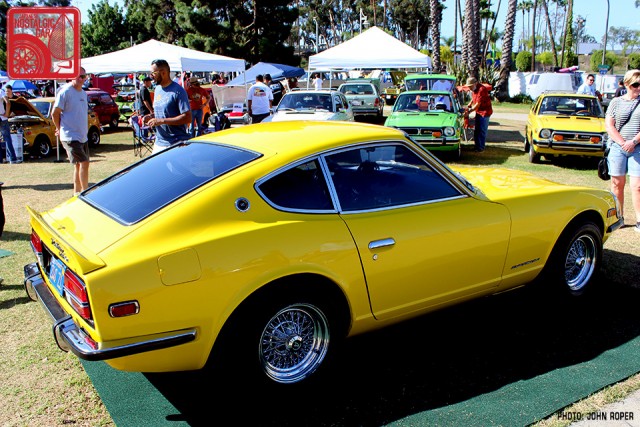 So there you have it, three Z-Cars inspired, touched, and owned by three men who are an indelible part of the car’s history and its success in America. The fact that these cars have been built, restored, and cared for says a lot about the Z. Few cars, Japanese or otherwise, can claim the legions of devoted followers that it enjoys. One day, we hope owners of other Japanese cars will show this level of devotion to their preferred models, but for now the Z stands heads and shoulders above the rest.

15 Responses to JCCS 2015: A tribute to legendary figures in Z-Car history