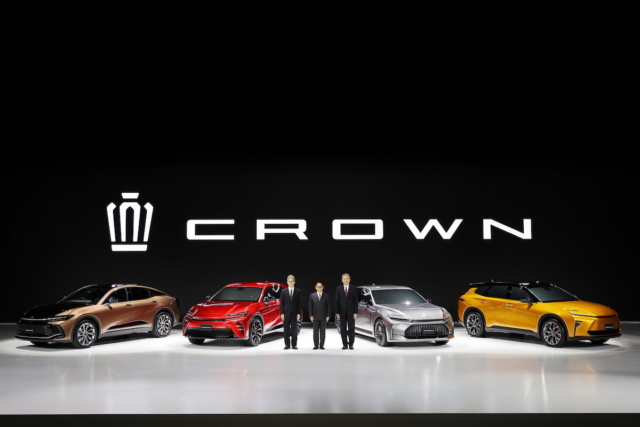 After much consternation and speculation the 16th-generation Crown was launched earlier this month, and to be honest we are still vexed. The Crown Crossover is, to us, such an affront to nearly 70 years of tradition that we can’t stop thinking about it. It’s not just its grotesque styling or front-wheel biased AWD drivetrain, though those are bothersome, but it represents a greater question. That is, does Toyota care about its own history?

We has a similar gut feeling when Toyota announced that the Supra would return as a BMW-based sports car. Instead of the Crown Crossover we (thankfully) got four models, including a Sedan, but also a small SUV called the Sport and a larger SUV called the Estate. Toyota has just released subtitled versions of the Japanese Crown debut and its subsequent Q&A session, and it might give some insights into the Crown’s radical departure from its past.

Most non-Japanese people probably won’t care at all about whether the new Crown is front- or rear-wheel-drive. But, the Crown has been a pillar of Japan’s culture, and not just its car culture. Like bullet trains and Super Cubs, you just expect to see Crowns floating through the country’s topography like a shorthand for Japan itself. 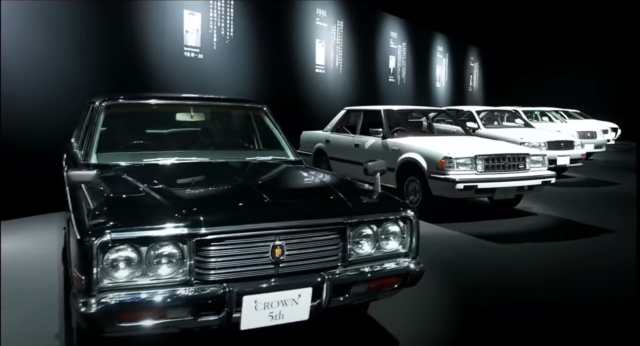 An even better description comes from the brief history of the Crown that CEO Akio Toyoda begins the presentation with. Phrases from Crown advertising through the years symbolize the car’s place in the cultural fabric. A Symbol of Life’s Success. The Essence of Japan. Someday, a Crown.

It all started during the early days of Japan’s motorization. Many Japanese companies — Mitsubishi, Isuzu, and even Toyota’s great rival Nissan — had gotten their start assembling licensed knock-down kits but Toyota insisted on paving its own way. It was a point of pride for not just the company, but the country. Kenya Nakamura, chief engineer of the first Crown, once described the launch thusly:

It was like all of Japan was in the midst of a festival. When I apologized for something that wasn’t good enough, customers consoled me by saying, “It’s just a tiny scratch, no big deal.” It was like the whole country was giving me a push.

The Crown was a marker of Japan’s perseverance and its arrival. Akio Toyoda said in his presentation, “In the 1980s Crown had undoubtedly become Japan’s flagship.”

It was the kind of car that the average family man aspired in their youth, and bought when they had landed in a comfortable place in their life and career. Senior General Manager of Design Simon Humphries described it as dignified but, importantly, attainable.

In the Q&A, Toyoda himself relayed how he’s had a Crown at home since he was born in 1956, one year after the model’s 1955 debut. To watch the dawn of Japan’s motorsports scene, he rode to Suzuka and Fuji Speedway in a second-generation Crown. He always looked up to those who drove a Crown. When he worked at the Motomachi plant, it was what the floor managers had. He thought he would like to own one himself someday, and that’s how the phrase “Someday, a Crown” came to be.

However, Toyoda also addressed the limitations of such tradition: “Until now, the Crown has been associated with a cool, older man. If a woman was driving a Crown, people would wonder if she had borrowed her husband’s car. If it was a young man, they supposed it was his father’s car.” Toyoda-san wants the drivers of the new lineup to feel like it’s their own car.

Toyoda ends the presentation with the notion that he wanted the Crown to be, for the first time, a global flagship for Toyota. Recent generations have been sold in the Middle East and China, but the new Crown will be sold in 40 countries around the world.”I would be more than happy if we could help restore vitality to Japan by making the Crown, a Japanese car, loved around the world,” Toyoda said. “Customers from around the world will now get a chance to drive this historic Japanese nameplate born out of passion, pride, and progress.” 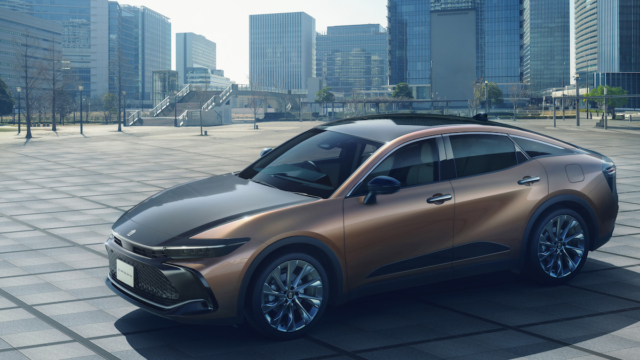 However, that seems to contradict a philosophy that Toyota had when creating previous Crowns. “Best in town, not best in the world.” The president of the Midsize Vehicle Company within Toyota, Hiroki Nakajima, took to the stage to describe the Crown Crossover’s creation.

He revealed that two years ago, he thought the next Crown would be a partial redesign of the 15th generation. He took the idea to Toyoda, who asked in response, “Is this truly going to result in evolution? Maybe we should skip a partial redesign.”

Nakajima went back to the drawing board and, after much deliberation, he explains, realized that their focus had been on developing improved versions of the cars they already created, and questioned if they were actually making cars with the customers in mind. In the Q&A, Nakajima cites the Corolla’s staying power. It has been a continuous nameplate since 1966 because it was evolved with the times, he pointed out, referencing how in mid-80s it went from rear- to front-wheel-drive.

Designer Humphries said they they got permission to, “break the rules.” The Crown team decided that the Crown’s shape and drivetrain were not set in stone. Different energy policies and powertrain requirements in each region meant a RWD sedan would give the Crown the global reach Toyota desired. Even in Japan, it no longer held the exclusive position as a chauffeured car as it once had. Vans like the Alphard had taken that position due to its height and ease of entry and exit. 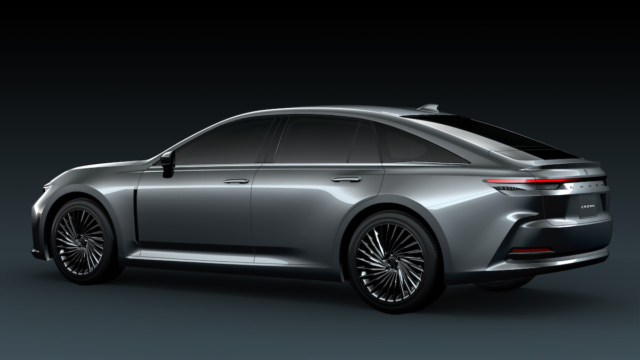 So, they came up with the high-riding Crown Crossover as a compromise. Nakajima then went back to Toyoda, who said, to his surprise, “Why don’t we also think about a sedan?” In the presentation, this was spun as the brilliant Toyoda keeping the team on its toes with a Mr Miyagi-like misdirect.

However, a question from a reporter with the Chunichi Shimbun, the newspaper that actually reported the discontinuation of the traditional Crown sedan, gave us a peek behind the curtain. The reporter asked about the departure from RWD sedan format. In his response, Toyoda admitted that because of the article, he “believe[s] that the Crown movement was created.” He added:

The public’s reaction to the article reminded us of its strong presence. We never said that we were discontinuing the sedan, so today, these four models are our official response. However, I think the fact that there have been such rumors about the Crown show the expectations for it. The media has in a way created a launch pad for the Crown to take on the world.

Another question from a reporter with Best Car about the release order, there was perhaps an even more revealing slip. Toyoda said, “First, we discussed extensively about what sort of shape should replace the sedan… [emphasis ours] we came up with the Crossover. Then, we said to ourselves, we should not forget about the sedan.”

Originally it was going to stop there. Then the Sport and Estate were added, but it explains why the Crossover is farthest along. Reading between the lines, it certainly seems that the Crossover was originally intended to be the Crown. When the Chunichi Shimbun published the rumors of the sedan’s discontinuation, the public outcry made them rethink their decision. That’s also probably why the Crown Sedan looks like a quickly reskinned Mirai. 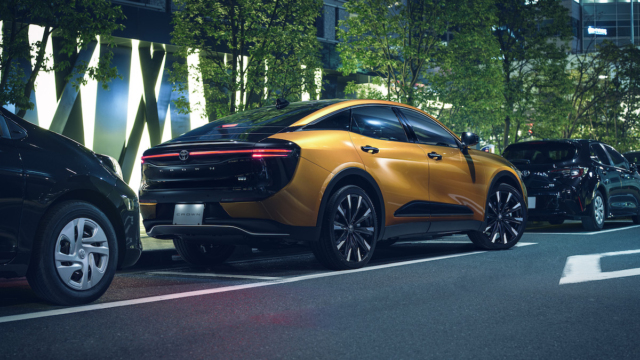 Or maybe we are just irrationally obsessive overthinkers. Toyota will likely never disclose what their true intentions with the Crown were. The inner workings in one of the world’s largest companies will forever remain opaque to the rest of us (though at 30:06 Toyoda provides a humorous answer about how decisions are made).

In both videos there’s a lot of talk about “making ever better cars” and evolving with the times. But it’s also clear that there’s a lot of reverence for the Crown name. Draw what conclusions you will. The Crown Sedan might appease traditionalists this time around, but the expansion into four body styles will only make it easier to ditch the four-door when it’s time for the 17th generation.

permalink.
This post is filed under: Next Version and
tagged: crown, S230, toyota.