VINTAGE RACING JOURNAL: Why Monterey was so important for Nissan 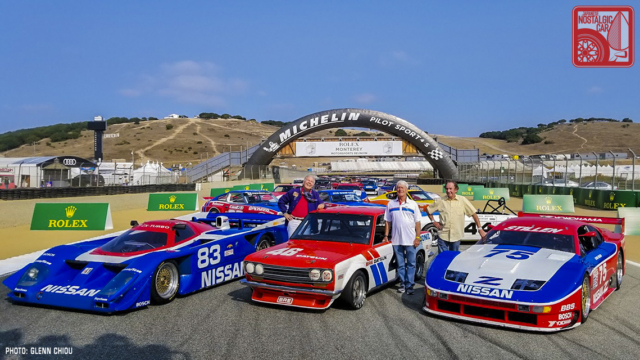 For one week this summer, Monterey became the playground of Nissan and Datsun fans from all over the globe. For us Datsun racers, it was our opportunity to tell a story, a story of a manufacturer long overlooked in automotive racing history, a story of true grassroots racers who competed for the love of the sport, and who proudly wore the Datsun and Nissan badge as one of honor. 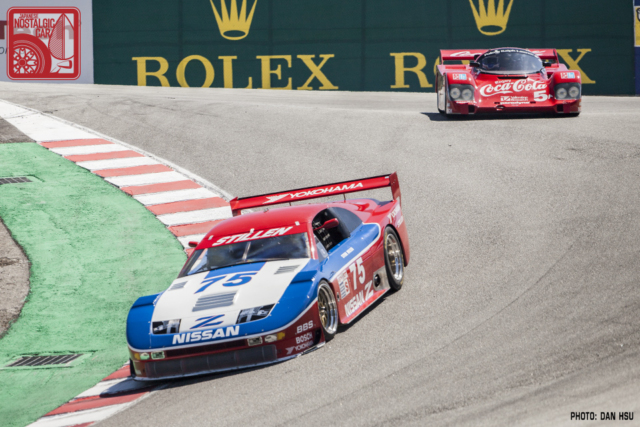 With more than one hundred national SCCA titles under its belt, Nissan (and Datsun) has come a long way from winning its first SCCA race as a manufacturer in 1962, and its first National title in 1967. For whatever reason, though, the marque has long been excluded in vintage racing. 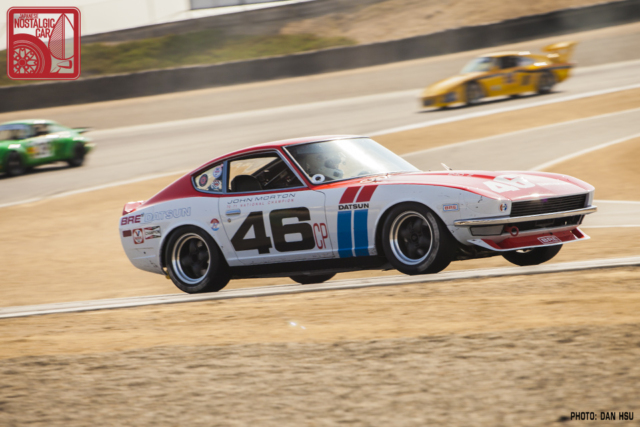 Given its success, Nissan is just as important as and deserves just as much of a place in automotive history as BMW, Alfa Romeo, Porsche, Ferrari, or even Lola. As an owner of vintage Datsun race cars I, along with my fellow Nissan drivers, see our mission every year as racers, fans, and brand ambassadors that help Nissan, and by extension other Japanese marques, receive their due in worldwide racing history.

Having the Rolex Monterey Motorsports Reunion (formerly called the Monterey Historics) this year select Nissan as the featured marque had a tremendous trickle-down effect. All over the region at other Monterey Car Week events, the Nissan and Datsun brands saw strong representation where they would otherwise have not. I vowed to participate in as many of these events as I could. 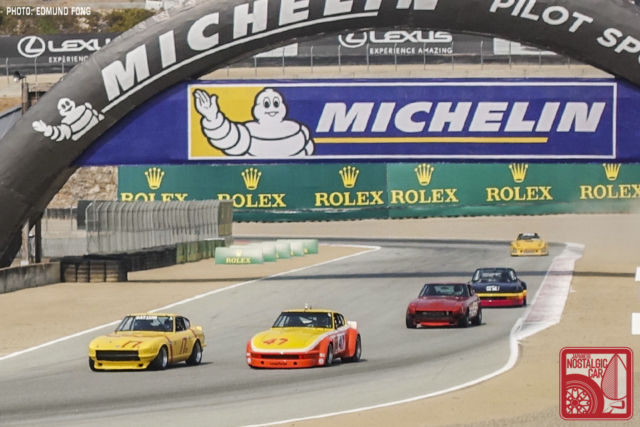 Marquee events like Concours on the Avenue, the Pebble Beach Concours d’Elegance, and the Quail all paid tribute to Nissan. Simply walking the streets of Monterey and Carmel, one could at any moment hear the twin turbos of a GT-R or the throaty carburetors of an L-series. Even at the Rolex Monterey Motorsports Reunion, it wasn’t uncommon to see drivers of other manufacturers wearing Nissan and Datsun racing colors in solidarity.

Typically the Ferrari and Porsche-laden Concours on the Avenue event in Carmel has very few Japanese cars, if any. This year, they honored Nissan by creating a judged Nissan/Datsun class, allowing several of us Datsun drivers to lead the way into the town’s center where the show is held. 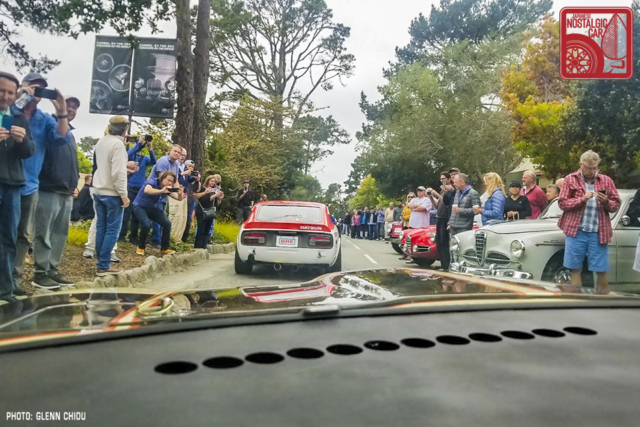 We were welcomed by an eager crowd of car enthusiasts, all of whom had woken early to see the arrival of the RMMR race cars. Prior to leaving the track, the director had reminded us that when we arrived in Carmel to “wake the neighborhood.” We didn’t need to be asked twice! Being the first to enter this year gave Nissans plenty of presence and further cemented the notion that Datsuns were here to stay. 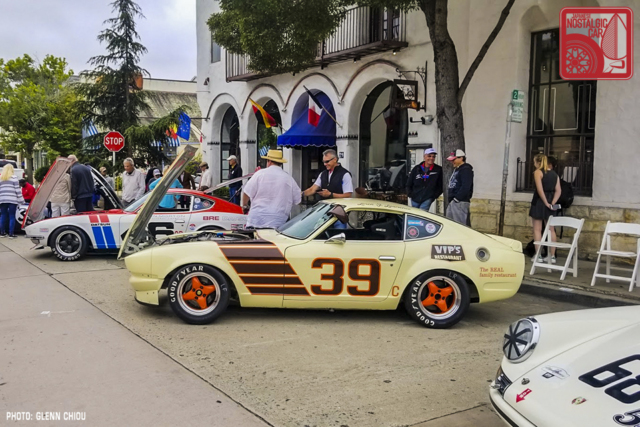 And, the people loved it. It was a rare opportunity for us to share Datsun history with those who would not normally attend a road race. What truly makes Nissans so special is that they’re relatable. During the show, dozens of individuals came by to share stories of Datsuns past — crazy driving stories, prom stories, meeting their girlfriend stories — it was endless! Not many folks can really say they owned a Ferrari 275 GTB or Porsche 935, but everyone knows someone that owned a Datsun. 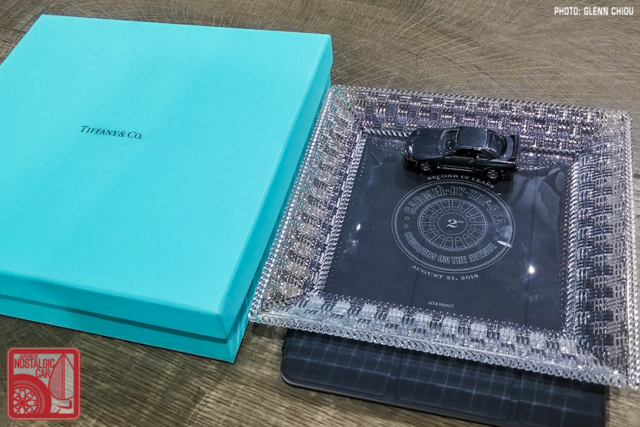 As if being apart of the atmosphere wasn’t enough, Concours committee members presented owner of the #46 BRE 240Z Randy Jaffe and me with the first and second place Datsun class awards! It was more than a win for us, but a win for Datsun. After years of disregard, the marque was finally getting the recognition it truly deserves. It gave us hope that these cars will continue to be welcomed into the prestigious event for many years to come. 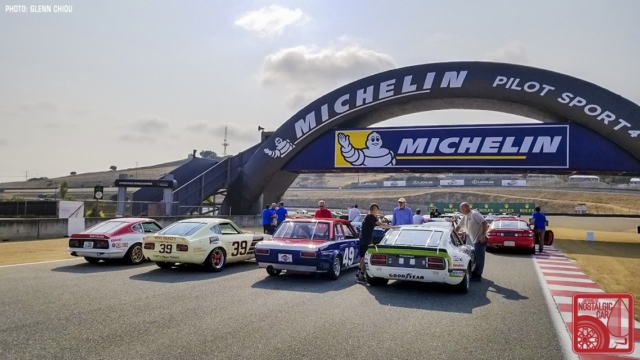 The following day, back at the Laguna Seca, we lined up for the annual tradition of a group photo of all the RMMR participants and their cars. Only cars with racing provenance are accepted into the event, and this year we saw more Nissans than any other time in modern history. As dozens of Nissan and Datsun race cars lined up between turns 3 and 4, it felt like history in the making, an experience that could only be described as like having our band accepted into the Rock ‘n’ Roll Hall of Fame. 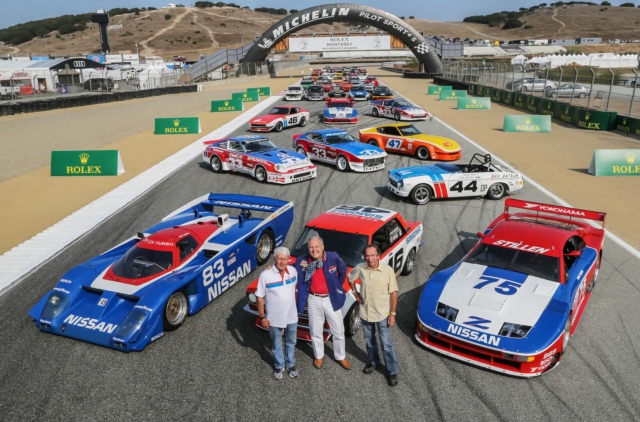 Legends like Peter Brock, John Morton, and Steve Millen posed proudly next to the championship winning ex-Brabham/Morton GTP ZX-Turbo, Morton’s BRE 510, and IMSA GTS 300ZX, with a whole family of official and privateer Nissan race cars behind them. It was a once-in-a-lifetime opportunity for a Nissan USA family portrait. 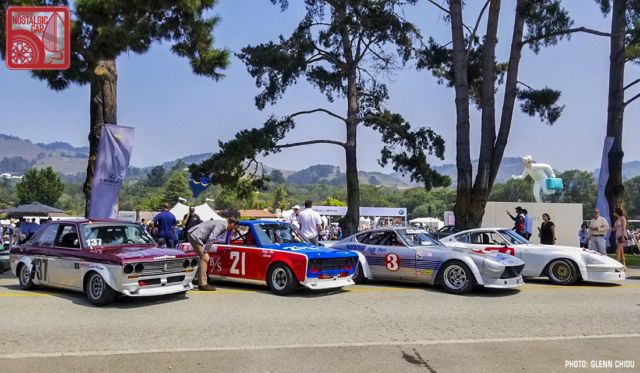 On Thursday, The Quail was another highly exclusive event that rolled out a Nissan tribute. For those unfamiliar, it’s a car show that typically costs $600 just to get in, while top level tickets cost thousands and include a helicopter ride to the venue and all-you-can-eat caviar.

Several Datsuns were hand-selected to be police escorted into the event, led by the Nissan GT-R 50 concept. As the cars took a lap around the Quail Lodge, participants stepped away from their Ferraris, Porsches, and Koenigseggs to take a look at the noisy little Datsuns. Later, we learned that a Series One 240Z even won its class, a sign that Nissans may have many promising years ahead at such events.

I’ve competed at vintage racing events across the country, but in the end, it’s Nissan/Datsun tradition of camaraderie that has always been most memorable for me. Participating in this week of celebration for the Nissan and Datsun marques was a dream come true, but to share it with my crew, the JNC team, my fellow racers and racing heroes, and most of all the fans, is priceless. 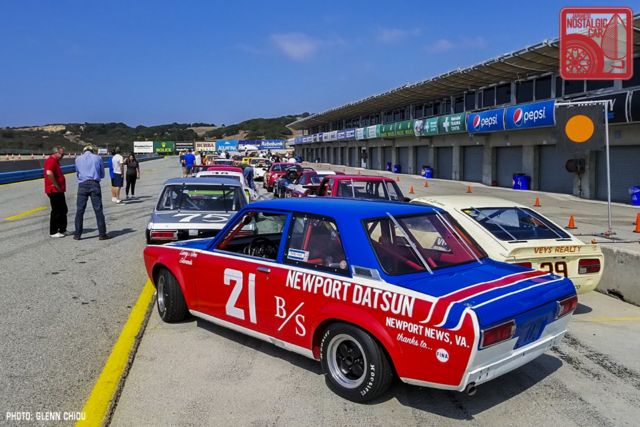 Everywhere we went, we met people whose eyes lit up at the sight of vintage Nissans. It was an unqualified success for the Nissan brand. But, what’s even more significant is that the recognition of the marque has opened doors for new generations of car enthusiasts, and it is they who will keep these wonderful machines alive.

5 Responses to VINTAGE RACING JOURNAL: Why Monterey was so important for Nissan