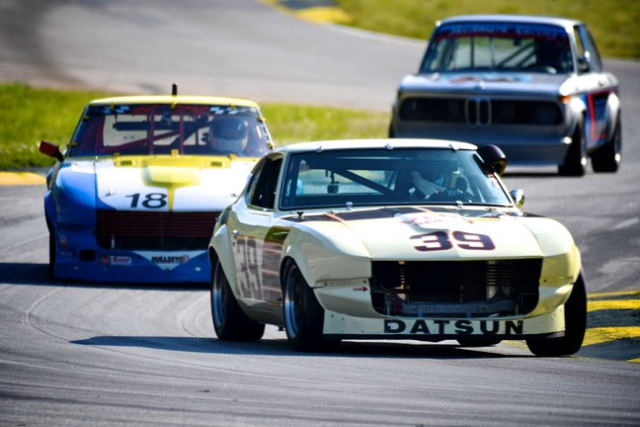 Road Atlanta is truly a sight to see. Its rich history and beautiful rolling hills make it the perfect venue for vintage racing. After spending most of the prior afternoon and evening swapping differentials, we entered Day Two with high hopes for a successful race day. 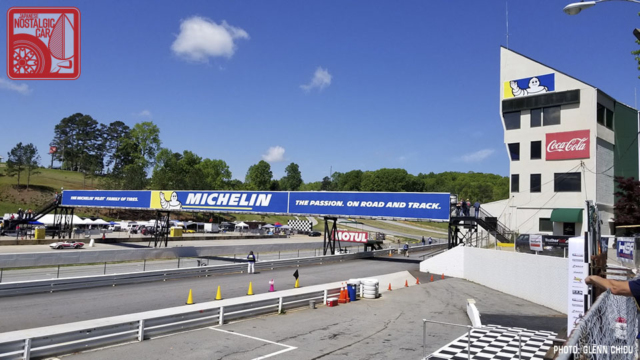 As the first official day of The Mitty event (the prior day was a test day for drivers), the crowds started rolling in. Nissan fans from all over attended to show their support for Nissan as the featured marque for the first time. It was apparent from the hats, t-shirts, corrals, and flags that Nissan and Datsun were represented in full force.

The importance of taking full advantage of practice sessions is often overlooked by many drivers. Especially on a new track, it’s an opportunity to not only determine your points for braking, turn-in, and wide open throttle, but to also pay particular attention to cues that can often make you faster. At my home track of Laguna Seca, it’s often recommended that drivers new to the track focus on the tall telephone poles when coming over Turn 1. We also often hint to drivers to point their car at a large tree when entering the famed and blind Corkscrew. 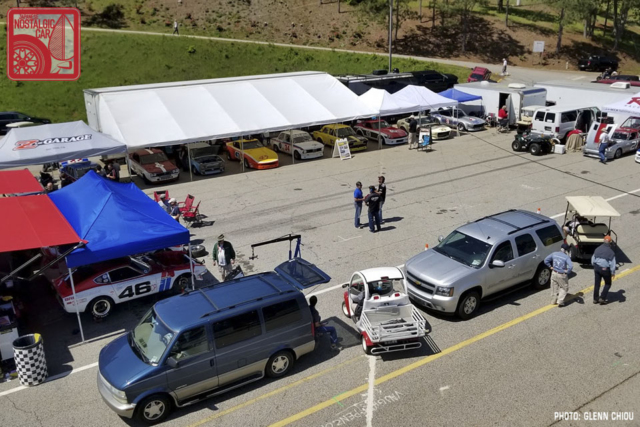 Road Atlanta was no different. Before entering the track, I spoke with many home track drivers to uncover its tricks. I learned that Turn 2 has a tall telephone pole, and that if you point the car at it before entering, you’ll be perfectly set up on the far left side of the track to enter Turn 3. Entering 10A after the back straight, there’s a patch of black asphalt that proved to be the perfect spot to begin hard braking into the chicane. Exiting Turn 11, there’s a wide black asphalt line that if you stay to the left of, sets you up nicely for Turn 12.

Unfortunately, my attempt to execute on these home track advantages was met with quick failure. After exiting Turn 7 onto the back straight and reaching 5,000 rpm, I noticed a violent vibration coming from my Z’s rear end. It made me nervous enough to pull into the pits after just two laps into the practice session. To say I was frustrated was an understatement, as this was another setback that would delay my familiarization with the track. 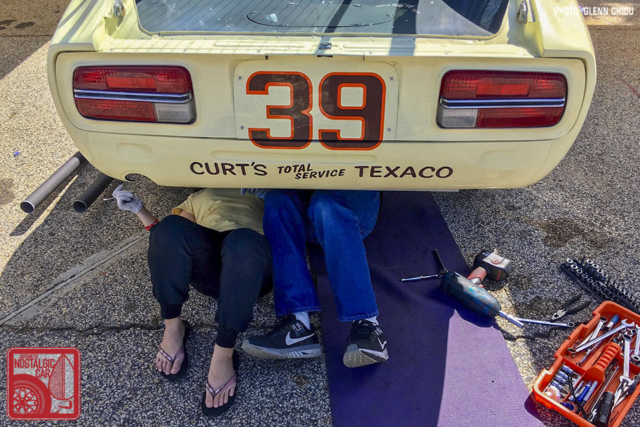 Given that the only part changed on the car from the prior day was the 3.9 welded differential, we dived straight into finding a replacement. Camaraderie to the rescue again! Larry Cooper, a SCCA E-Production 240Z racer, graciously lent us his 4.11 OS Giken LSD. I was especially cautious, however, after being told that he would be competing in this years SCCA National Runoffs at Sonoma Raceway with this very differential unit!

It was back to work.

Then, after two consecutive afternoons under my car, I finally had a moment to relax and walk the paddock. I was especially excited to see many of the historic race cars that call the East Coast and South their home. While John Morton, Randy Jaffe (owner of the BRE #46 240Z) and I were enjoying the beautiful machinery, we were caught off guard whden a group of Historic Sportscar Racing staff asked us to promptly follow them. 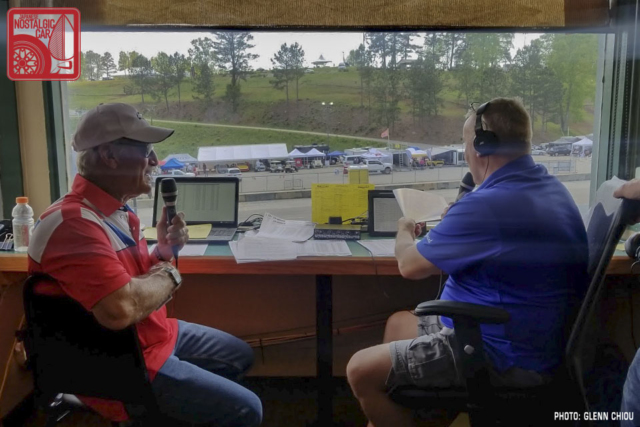 We headed up the stairs of the iconic front straight tower to the commentator booth. HSR wanted to interview Morton, Randy and one of the west coast drivers, and I just happened to be with them at the time. It was humbling to hear about John’s stories of yesteryear and how he put helped Datsun on the map. It was also a pleasure to represent the west coast contingent by sharing our excitement over driving such a historic race track. 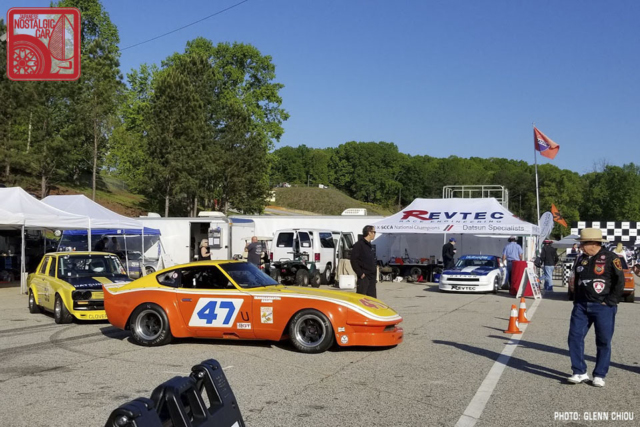 Next up was our first qualifying session of the weekend. After my series of mechanical issues it seemed that we had finally sorted all the gremlins — or so I thought. Qualifying got off to an amazing start, and with each lap I was bringing up the pace. About five laps in, however, the car started to bog as I entered Turn 4. Before I knew it, the car was stopped on the side of Turn 5, the result of a fuel pump failure. Frustration consumed me yet again. It felt like I couldn’t catch a break.

This is often the less glamorous side that most folks don’t see in racing. Preparation for a race weekend is absolutely key. Every single part on the car must be considered a potential failure point. While I did my fair share of prepping, sometimes the racing gods are not in your favor — bad gear ratios, a vibrating differential, and now the fuel pump. Once again, it was back on the jack stands. 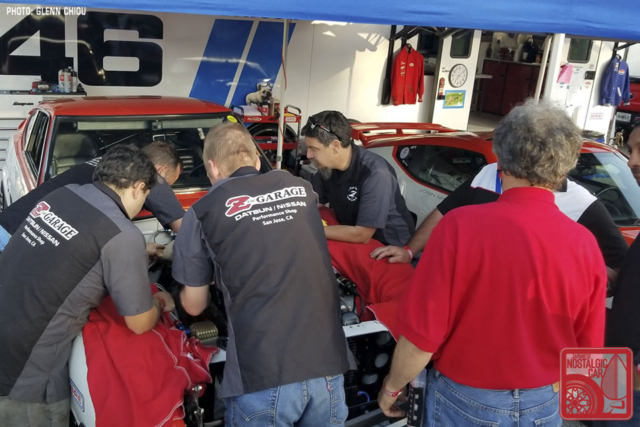 While I was fighting my own mechanical battles, an amazing story was unfolding beside me. John Morton in the #46 BRE 240Z had been towed back into the paddock. Holes on either side of the block hinted at a rod failure. The Z Car Garage team spent no time in remorse and got straight to work. Randy promptly took off back to his storage to look for a replacement motor, and the Z Car Garage team disassembled the blown engine while a crowd of fans watched anxiously. 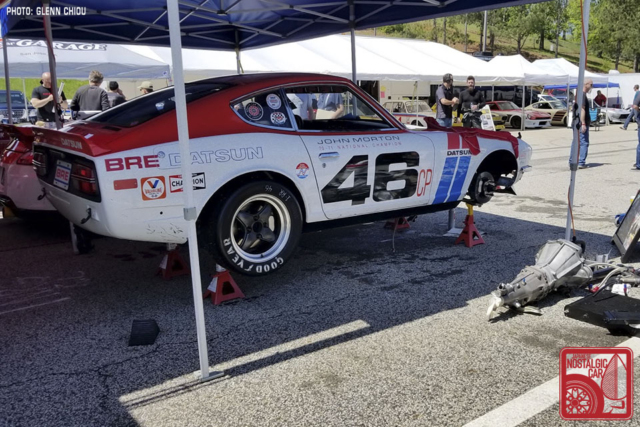 Before long, Randy had returned with four motors, two L28s and two L24s. At this point, it seemed like the team probably could have rock-paper-scissor’ed to determine which motor to use. Although all were race motors built by E.B. Parkinson, father of BRE driver Dan Parkinson, none of them had run in over 35 years. 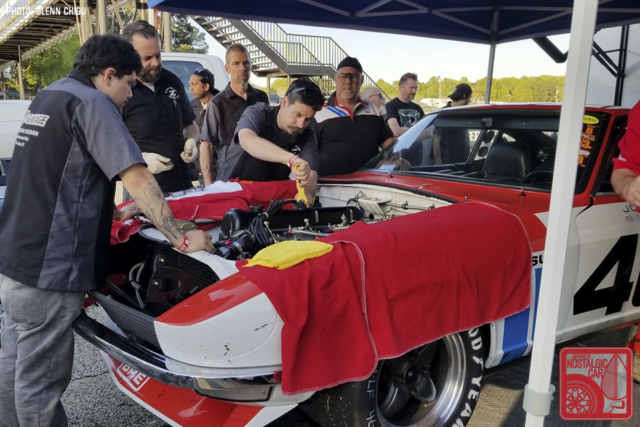 An L28 that looked like it had come out of a pick ‘n’ pull was chosen and the Z Car Garage team got to work. While I had seen and been a part of my fair share of motor removal and reinstalls, their work was truly something else. A calm madness was probably the best way to describe it.

BRE Engine Chief John Caldwell, Gary Brizendine, and others jumped in to help revive the fallen BRE car. After several hours, the long-awaited moment was at hand. Z Car Garage founder Rob Fuller was at the seat and cranked the motor over. The car hesitated, some adjustments were made, and he cranked it again.

As the motor roared back to life after a 35-plus-year slumber, onlookers applauded. It was an amazing team effort, and the decades-old race motor could not have sounded more crisp and fresh. As the car made its first voyage around the pits cheers and clapping followed. 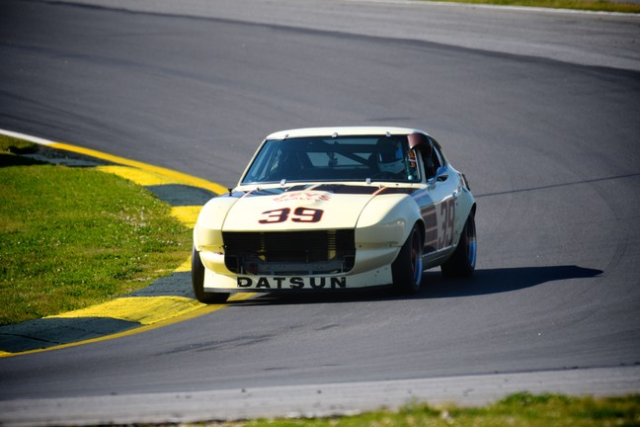 This was what vintage racing is all about — everyone pulling together and not letting their driver, or even sometimes their competition, lose the weekend without a fair fight. And while my day had ended in failure, I was still having the racing experience of a lifetime.

In case you missed it, our adventures began with The Road to the Mitty, Part 01 and Part 02, as well as Test Day.