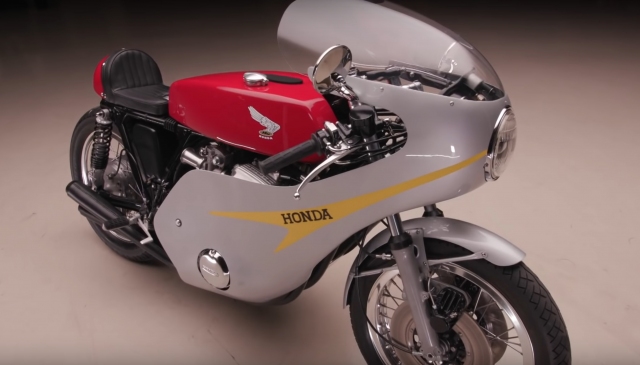 Speaking of Honda racing bikes, a custom 1973 CB750 might just be the coolest Japanese vehicle Jay Leno has ever hosted on his YouTube channel — an iconic Honda superbike built to channel Old Man Soichiro’s renowned early RC race bikes of the 1960s. The former talk show host and prolific car and motorcycle collector went to a British bike show, and in a sea of BSAs, Triumphs, and Royal Enfields, picked Vincent Scarelli’s custom “CR750” to invite onto his show.

Even without the staggering coolness of this build, Leno, whose first bike was a Honda CBX, has great things to say about the CB750: “To those of us of a certain age, this is a legendary motorcycle. When this came out in 1969 it’s almost hard to explain to people how revolutionary it was.”

Indeed, its large-displacement 750cc, four-cylinder setup when most European bikes on the market had two or three, each fed by its own Keihin carb, was revolutionary. On top of that, it boasted an electric starter disc brake, and quad pipes that Scarelli says, “Sounded like a jet, [while] everything else was a biplane.”

With that solid foundation, Scarelli took eleven years to transform it into an amazing tribute to Honda’s greatest race bikes of the 1960s. He used just the frame and engine from a used CB750 as a base. The engine itself had its displacement increased by 100cc, hotted up with a mid-range cam, rebuilt with a balanced crank, and can rev to over 9,000 rpm. Everything else was either a brand new Honda sourced part, aftermarket, or custom made. The beautiful silver, red and yellow livery inspired by bikes like the RC166 make you feel, on this street-legal machine, like a MotoGP champion from the 1960s. Two words: Simply stunning.