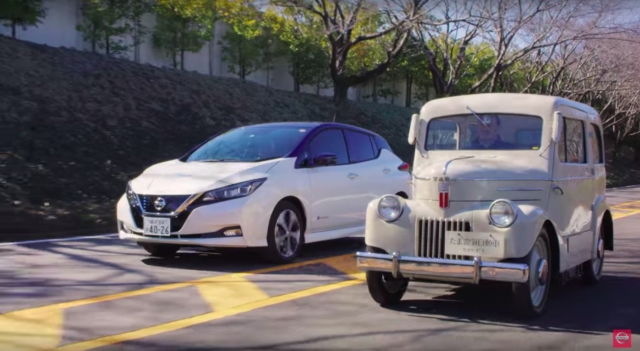 Long-time readers of JNC will be familiar with the 1947 Tama E4S-47-1 electric car. It’s one of Japan’s earliest electric vehicles, and one we’ve written about many times. Until now, though, we’ve never seen it running.

The Tama was born in the immediate aftermath of World War II, as Japan faced a shortage of oil and fuel. Though the technology was primitive, yielding only a 22 mph top speed and a range of just 60 miles, the Tama did share one design feature with the Leaf. Both used an array of batteries laid flat beneath the passenger compartment. Despite their shortcomings, Tamas were used as taxis until 1950.

With its skinny tires, single overhead wiper arm, and semaphore turn signals, it certainly looks like a car from a different age. It also looks positively tiny compared to a modern “compact” crossover, though it’s not much shorter. Nissan restored this example from its heritage collection in 2013. We’re glad to see it was more than just a cosmetic job.

permalink.
This post is filed under: Uncategorized and
tagged: electric car, nissan, tama.