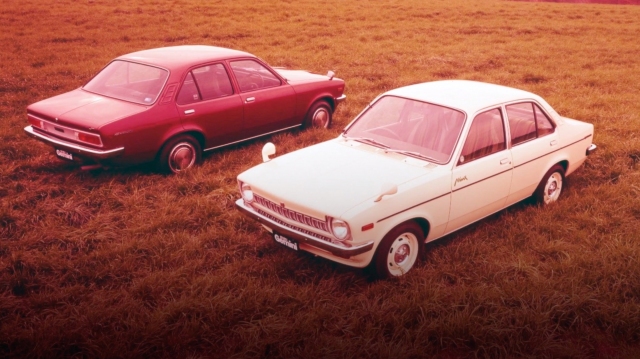 Introduced in 1974, the Isuzu Gemini was known by many names around the world. Depending on the country, it was sold as a Chevy, Buick, Opel, Holden, Vauxhall, Daewoo, Saehan, and probably a few more. In Japan, though, it was initially named the Isuzu Bellett Gemini to denote its place as a successor to Isuzu’s main (and by then outdated) 1960s compact. Its name derived from the constellation of twins, a nod to its developed for GM’s the auto giant’s global platform program.

The Bellett part of the name was dropped in 1975, and the Gemini went on to become Isuzu’s mos popular passenger car. In fact, it was so popular, that this FR Gemini continued to be built even after the Gemini’s second-gen front-drive successor was introduced in 1985. The two were sold alongside each other until February 1988. In total, 768,537 were produced according to Isuzu.

The yellow one in Isuzu’s museum collection is an early PF50 TL sedan. It was restored as part of a 2004 company reorganization initiative that took all the cars that had been stored at various factories and warehouses and sent them to the prototyping department for restoration. Even so, the project couldn’t begin until 2008, when Isuzu labeled the restorations a “knowledge transfer” project. Now, the museum houses 31 cars and trucks that get to be enjoyed by fans of classics and Japan’s industrial history.

permalink.
This post is filed under: Video and
tagged: gemini, isuzu, opel, PF50/PF60.

8 Responses to VIDEO: The Gemini was Isuzu’s most popular passenger car