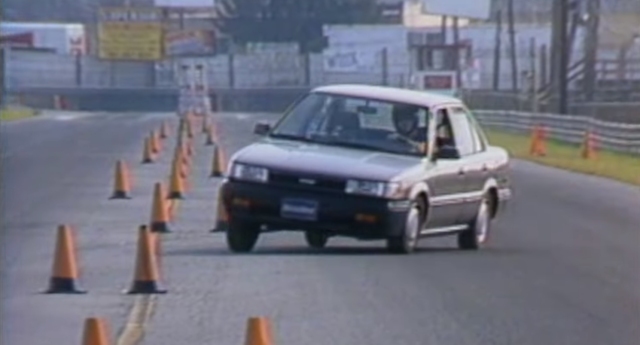 It’s really amazing what we take for granted in cars today. Back in 1988, Toyota extended its market dominance by offering multi-valve technology on a humble four-cylinder Corolla. That doesn’t seem like a big deal now, but was a small revolution in the highly contested compact sedan class of the 80s. Add a roomy cabin and sleek (at least compared to the outgoing E80 Corolla sedan) styling, and it’s no wonder the E90 Corolla was such a sales success.

However, it’s also funny what you didn’t get with the $8,900 starting price. For one, you had those ugly unpainted plastic bumpers and door handles. Features like power steering, AM/FM stereo, air-conditioning, and cruise control were all optional, and ticking off those boxes bumped the price to $11,000. Hell, the advanced 16-valve engine was still carbureted.

You really had go upgrade to an LE trim to feel like you weren’t settling, but the base Deluxe had good bones. The cabin was the prototypical Japanese interior of the era, excellent placement of gauges, audio, and climate controls. We long for interiors that are so logically laid out and lacking in pointlessly busy design flourishes nowadays. It had a supremely comfortable ride quality. And, as history has shown, these were bulletproof.

Motorweek‘s road test did note that the steering, shifter, and clutch were all too soft. That’s typical of Toyota at the time to make their mass-market cars as easy to drive as possible (For a sportier experience, you could turn to the also newly mulit-valve 1988 Honda Civic. Motorweek is wrong about the Civic being more expensive). But, the Corolla is still analog, and thus probably feels better than 90 percent of the new cars available for sale right now.

Add to that a 30 mpg rating for the city and 35 mpg highway, plus a 0-60 time of 10.8 seconds for the manual, and it’s a not a surprise Toyota sold them but the bushel. Toyota was the first Japanese carmaker to offer a 16-valve four-cylinders in America with the AE86. While it seemed like a spaceship compared to the standard AE82 Corolla sedan, by the time this E90 generation rolled around, the gap between an AE92 GT-S and this bread-and-butter Corolla sedan had gotten a lot smaller.

permalink.
This post is filed under: Video and
tagged: corolla, e90, Motorweek, toyota.

3 Responses to VIDEO: The E90 Toyota Corolla offered 16-valve power to the masses