VIDEO: The 1989 Toyota Camry brought V6 power to the masses 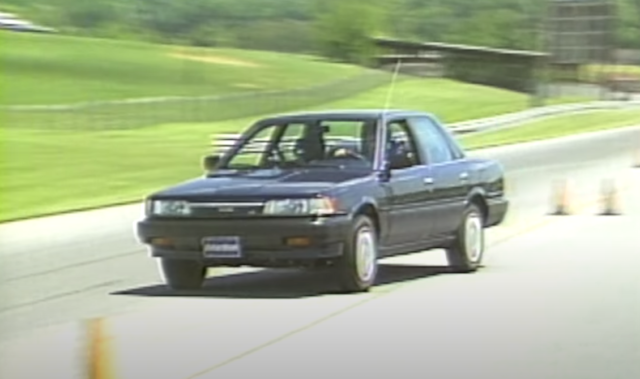 Today there is no question that the Camry is the benchmark for the ideal family sedan. Its reputation for legendary reliability and innocuous styling had to begin somewhere. Back in 1989, the V20 Camry still had to prove its worth against contenders such as the Chevy Lumina and Ford Taurus. And apparently, there was a time in America when the Camry was still unfamiliar enough that Motorweek insisted on calling it a Cam-ray throughout their video review.

The V20 Camry first arrived to the US market in the later months of 1986 (for the 1987 model year). Two body styles were available, the traditional four door sedan and a proper station wagon replacing the previous generation’s 5-door liftback. 1988 was the year Toyota Motor Manufacturing Kentucky (TMMK) began production of 4-cylinder Camrys in the United States to keep up with demand.

One year later, the Camry would gain two additional cylinders. Its silky smooth 2.5-liter 2VZ-FE V6 featured four cams and four valves per cylinder, good for 153 horsepower and 155 lb-ft of torque. You had the option of a 5-speed manual or a 4-speed automatic. Motorweek’s V6 and automatic-equipped press car sprinted to 60 mph from a standstill in 9.3 seconds and hit the quarter mile, shaving two seconds off their four-cylinder’s time, while managing a respectable 19 city, 24 highway mpg.

Its high quality, cohesive cabin was praised for its lack of squeaks and rattles and its overall fit and finish, contributing to a serene 67 dB at 55 mph. The trunk was also complimented for its flat floor and low load height.

The V20 Camry jump started the model’s reputation for being bulletproof while offering Lexus-like quality to the masses. Due to Japan’s bubble-economy, yen came falling down from the heavens and into Toyota’s R&D labs, resulting in the V20’s velvet-like powertrains and overbuilt everything. These, along with its myriad combinations, is why we highly recommend considering it.

permalink.
This post is filed under: Video and
tagged: camry, Motorweek, toyota, V20.

4 Responses to VIDEO: The 1989 Toyota Camry brought V6 power to the masses