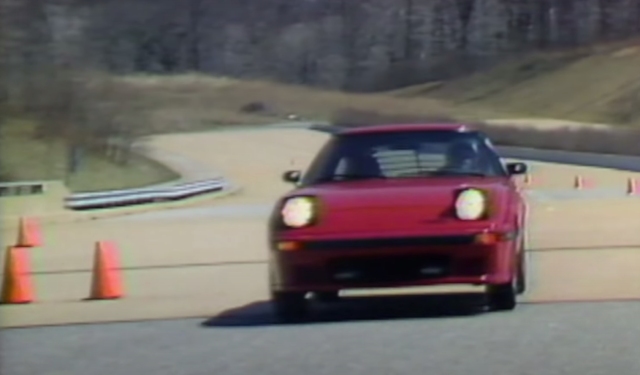 We’ve seen a lot of Motorweek‘s old reviews, but a recently uploaded flashback to a 1982 Mazda RX-7 GS is a standout. Few have raved about their subject matter as much as this one. That shouldn’t come as a surprise, considering the RX-7 is a fantastic car. What does surprise us, though, is just how closely the test matches today’s reviews of Mazda’s products some 40 years later.

Mazda, then as it is today, was a small company. So, it made do with the resources it had. Often, that meant putting seemingly sub-par components into their cars, like solid rear axles and a recirculating ball steering design. Even in 1982 these were seen as less ideal than a multi-link rear suspension or rack and pinion style steering rack. It’s a criticism not unlike that directed toward the current Mazda 3‘s torsion beam rear suspension. Yes, these were considered cheaper parts, and perhaps they were saving money on manufacturing, but somehow Mazda made everything work together like magic.

The 1982 RX-7 started at $9,700, which was a performance bargain for the day. It made just 100 horsepower and 105 lb-ft of torque, but weighed in at a feathery 2,400 pounds. Motorweek‘s test car was a GS model with quite a few accoutrements, like  an optional spoiler and sport bumper inspired by their successful IMSA race cars, Bosch driving lamps, and rear window louvers. It was optioned with a swappable sunroof/moonroof combination but, strangely, no aircon. That drove the price up to just under $14,000.

As with most Mazdas, the driving experience is what counted, and the RX-7 delivered that with gusto. Motorweek couldn’t stop gushing over the quickness of its acceleration, precision of the 5-speed manual, the predictability in its rear Bridgestones.

The plaudits kept flowing, with phrases like “road-hugging machine” thrown about. When discussing the excellent driving position, they describe it as “just big enough to let you feel like you’re wearing the car without being too cramped.” With descriptions of controllable oversteer and a very tight turning radius, reviewers wondered why there weren’t more RX-7s in movie chase scenes.

The review gave the RX-7 only a couple of minor dings. During repeated braking tests the 4-wheel discs heated up and the pedal began to feel mushy. The seats, they felt, could have been better padded. And, though the RX-7 was EPA rated at 21 city, 30 highway mpg, their combined tests averaged 20. That’s it. The video concludes with a “hope [that] Mazda will continue to improve” their fine, middle-class sports car.” Man, if they only knew what was coming in the FC and FD.

With almost universal praise from journalists despite meager resources, the Mazda of 40 years ago bears a strong resemblance to Mazda today. Sadly, there is one big difference between Mazdas then and Mazdas now: people were actually buying them. Upon the RX-7’s debut in spring of 1978, Mazda sold 100,000 RX-7s in their first year. Keep in mind that the 1978 base price of $7,000 is equivalent to, after accounting for inflation, $29,370 in 2021 dollars, or the price of a Subaru BRZ, a car consistently slammed for being too expensive. If only carmakers could still sell sports cars at that rate.

permalink.
This post is filed under: Video and
tagged: mazda, Motorweek, rx-7, sa22c.

2 Responses to VIDEO: The 1982 RX-7 GS was reviewed surprisingly similarly to modern Mazdas