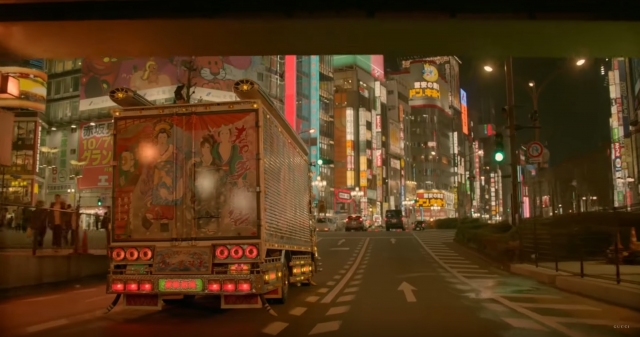 We somehow missed this, but in 2016 fashion brand Gucci used a dekotora to hawk its ridiculously priced clothing. In a video for their fall/winter line that year some Ziggy Stardust-looking “Gucci kids” (yes, that is a term the company actually uses) climb into a dekotora and hit the streets of Shinjuku. However, the truck isn’t simply any dekotora, it belongs to Kazuya Sekino, the same owner who used his truck to run supplies to the Tohoku region devastated by the 2011 tsunami.

Sekino, a dekotora ambassador, apparently loans his truck out to many photo and video shoots. The Hino refrigerator truck, named Lady Misaki, has appeared in music videos and TV shows in Japan, according to the Japan Times. Misaki-jo is Sekino’s third dekotora, and was purchased for ¥300,000 ($2,850 USD), though he has spent millions of yen modding it, including the mural of a Shinto god fighting an eight-headed dragon on the side.

We’re definitely not cool enough to understand what the Gucci ad is trying to portray, maybe just a generic “Japan” vibe. There’s also tea houses, pachinko parlors, and lots of neon lights if you didn’t get the Tokyo drift. In any case, it’s somewhat interesting to see this slice of Japanese car culture appear in a mainstream fashion ad.

permalink.
This post is filed under: cm and
tagged: dekotora.

4 Responses to VIDEO: That time Gucci used a dekotora to sell overpriced clothes