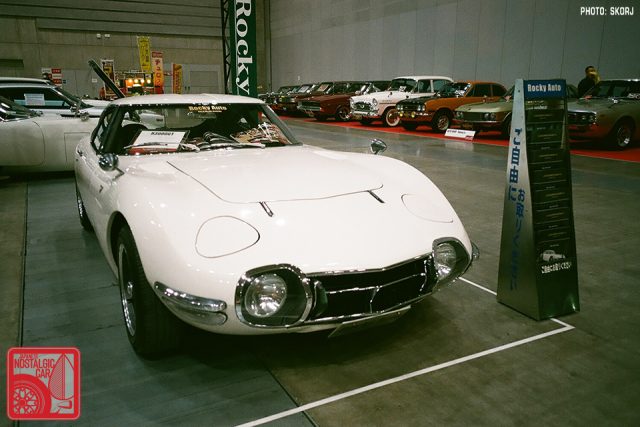 The Rocky Auto 3000GT is a work of modern art. A hand-crafted body draped over one of the finest drivetrains ever produced and screwed together by one of Japan’s top tuners, it’s an homage to a timeless blue chip Japanese classic.

Recently, Rocky-san had a very special guest come by his Nagoya shop for a pre-delivery test drive. Shihomi Hosoya was captain of the Toyota works racing team in the 1960s and 1970s, overseeing the motorsports activities of everything from a Sports 800 to the Toyota 7. In his early days, he even took the wheel himself, piloting cars like the Publica 700 and barikan Corona to class wins.

Perhaps what makes Hosoya-san most qualified to drive a 2000GT with a Lexus drivetrain, however, is that he also ran the body line development and conducted road testing during the 2000GT’s development, and was a driver in the the 1966 Yatabe speed trial that saw the 2000GT break 16 FIA world records.

Clearly it was a huge honor for Rocky-san to have Mr. Hosoya at his shop and take his creation out for a spin. Though in his late-seventies and displaying typical Japanese stoicism, Hosoya-san is noticeably excited to climb into the driver’s seat.

This isn’t the first time a Japanese motorsports royalty has driven a Rocky 3000GT. Earlier this year, D1 and JGTC driver Nob Taniguchi took one out for an in-depth review. This one’s a bit longer, and provides on-board audio of the naturally aspirated 2JZ’s straight-six exhaust note.

As we’ve covered before, the Rocky 3000GT is an amazing creation — all the beauty of a Toyota 2000GT but with modern amenities like power rack-and-pinion steering, power windows, and air con. It’ll set you back ¥19.8 million, or about $192,000 USD, but that’s still cheaper than the real thing.