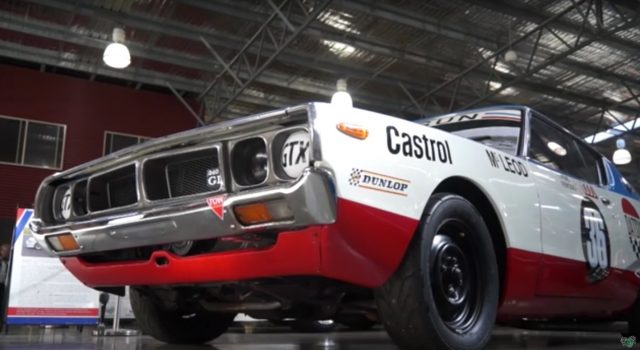 The kenmeri Skyline famously was debuted in race regalia at the 1972 Tokyo Motor Show, only to have Nissan pull the plug on the motorsports program it would have competed in due to the Oil Shock of 1973. It may never have seen trackside glory in Japan, but there was never a car the Aussies didn’t try to throw at a racetrack.

Now part of the Shepparton Motor Museum for legendary cars that raced at Bathurst, this particular Datsun 240K (as it was called in Australia) won second in its class and seventh outright against a slew of Holden, Ford and Chrysler V8s. It is a particular favorite of the host, but in the background you might see other cars we’ve highlighted before, like Allan Moffat’s Mazda RX-7, George Fury’s Group C DR30 Skyline, and Fury’s 810 Bluebird which once held the Bathurst lap record for six years. Watch the video above, but if you want to skip ahead to the Datsun part, you can skip right ahead to 20:40.