In the Venn diagram of automotive cultures, there are some that simply have no overlaps. Even a few short years ago, the idea that the moneyed, Euro-centric world of Formula One would collide with the underground, largely disdained world of bosozoku would be unthinkable. Yet here, in 2016, we have two F1 drivers who have just gotten an image upgrade by driving a Skyline Japan zokusha.

Red Bull F1 team drivers Daniel Ricciardo and Max Verstappen recently found themselves in Tokyo ahead of the Japan Grand Prix at Suzuka and filmed a little promo video driving around Shibuya in a C210 Skyline kaido racer. The car is, of course, a fine example of the breed, done in the style of Japan’s 70s and 80s style of motor gangs but refined with modern build quality and capital.

Some of JNC‘s Japan-based staff can’t help but think that the video and accompanying article is a little hokey. Not only are they driving around the same three blocks in Shibuya, but they are mobbed by “fans” flocking with cans of Red Bull in their hands (convenient!) that are “surprised” to see the car and meet the drivers. Sadly lacking any substance. No information on the car, owner, mods, etc. This is for motorsports, right?

Taking a look at the extended 11 minute cut reveals more to this video. We see both drivers looking bored out of their minds the whole time. No talking, no excitement. The only emotion to see is a few head bobs from some music piped in to the TS-X9 Pioneers rear deck speakers. The best quote Red Bull themselves could get was from Daniel saying “It’s pretty cool. It’s low!” Here, we also see the same group of “fans” in a few different takes looking for cue direction and all. 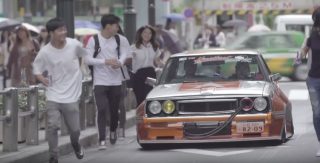 To someone who has lived in Japan for eight and a half years, the whole thing is glaringly obvious as a publicity stunt and disappointing in the lack of humility or interest in the kaido racer culture.

First, the car. The car is a Nissan Skyline C210 (hence the #210 on the doors), originally built from 1977-81 as the successor to the hakosuka and kenmeri Skylines, but modified with SSR MkIIIs running ridiculous negative camber and dish set with the classic Group 5 widebody styling and off-the-wall orange and while paintwork inspired by the Tokyo Motor Show kenmeri GT-R.

The actual owner goes by the name Souki, a member of the lowrider group Homies and a core member of the EDM group Rude Playerz. When he’s not playing gigs in Shibuya clubs, he can be found at his small garage working on his Lamborghini Diablo (also orange) or his Impala lowrider. 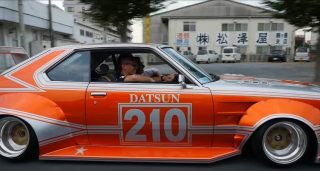 Seeing a car like this is not common in Japan, but not rare either, at least in Tokyo. Many custom shops are set up on the outskirts of Tokyo and areas around Kyoto, where it’s cheaper and space is not as limited. Souki himself is set up outside of Shinagawa.

Funny enough, you can see him at least once a month driving around Shibuya. The lowrider community comes out to Shibuya on the first Saturday of each month as a kind of meet and ride around 10 pm. The ride consists of driving in a few large loops that have the lowriders passing through Hachiko Square before finding parking along the adjacent roads.

If you wish, you can see what he has been up to from his Instagram account Souki_RPZ.