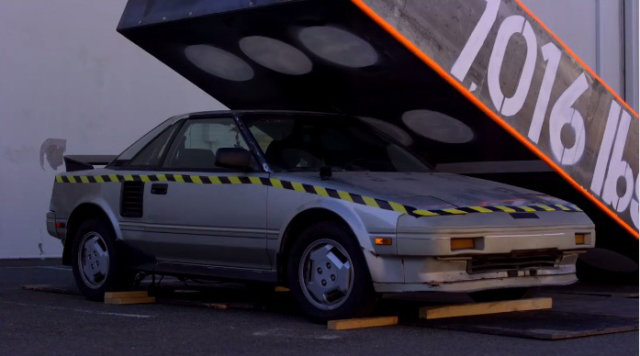 Last week, the Mythbusters once again found themselves on the receiving end of some pretty angry car enthusiasts for destroying an innocent, first-gen Toyota MR2. The internet’s response was swift and fierce, but this wasn’t the first time virtual pitchforks have been taken up in response to their wanton Toyota destruction.

The conceit of the segment was to see if a regular domino could knock over progressively larger blocks until they toppled one large enough to crush a car. That seems like a fun experiment, but unfortunately the car sacrificed in the name of science was a beloved and increasingly rare AW11 MR2. What their hypothesis couldn’t predict, however, was how angry lovers of classic automobiles would get in response.

They should have known better. Back in 2006, they caught the ire of Toyotaku when an experiment packed 500 butane cigarette lighters into a car and ignited them. That car, sadly, was even rarer than an AW11 MR2, an RT52 Toyota Corona, and it caught on fire.

And then there was the time when they drove a perfectly good X60 Cressida into a wall made of duct tape. 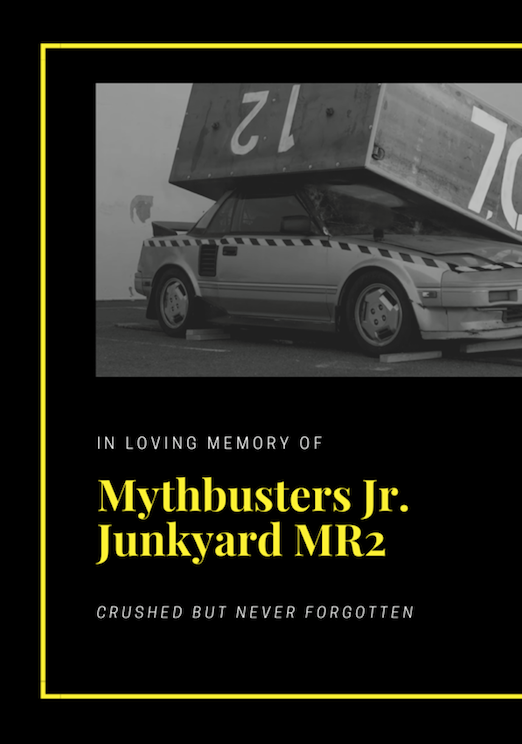 In response to the latest outrage, Mythbusters posted a half-cut off image as a tribute to the MR2, with the words “In loving memory of Mythbusters Jr. Junkyard MR2. Crushed but never forgotten.” It didn’t really work, as commenters quickly responded with a litany of cars they could have crushed instead. Hopefully, next time they’ll consider a less desirable victim. In this case, though the MR2 is gone, we have to say we are pretty impressed by the outpouring of support from the car enthusiast community coming to the helpless car’s defense. You guys are the best.

permalink.
This post is filed under: Video and
tagged: aw11, mr2, toyota.