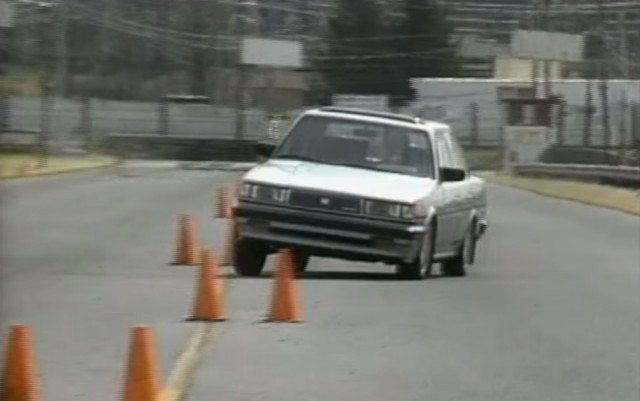 The Motorweek archives continues to entertain with another star of the 1980s, the Toyota Cressida. Before it was rediscovered in recent years by those with drift sedan or zokusha aspirations, the X70 Cressy was nearly entirely forgotten by much of the automotive world. It’s hard to picture what the reaction to the car was in context of its era, but luckily the remarkably tepid PBS car show has the 80s everyman take ready to go.

They start with heaping tons of accolades onto the top-of-the-line Toyota sedan. It “pampers its passengers” like an American land yacht, while providing the “crisp handling” of a European sports sedan. Things that we take for granted today, like flush headlights and side glass, are novel in 1985 and receive high marks. It’s funny to think of the Cressida’s front lip as an “aggressive air dam,” but we suppose compared to what was available at the time it’s true. Nearly all new luxury sedans today have different shift maps for economy or sport modes, but back then the Cressida’s ECT transmission was a “uniquely Japanese” feature.

It’s not all wine and roses, though. The Cressida is criticized for its body roll in the slalom and high price. In the end, Motorweek‘s assessment is that it’s a “new class of car — a mid-life crisis sports sedan.” It’s a review that gives new-found appreciation for the Cressida, and they even get to drop the world “Oriental”!

And as a bonus, here’s a review of the Supra from the same era.

permalink.
This post is filed under: Video and
tagged: a70, cressida, Motorweek, supra, toyota, x70.