VIDEO: The Lexus ES300 had some unexpected features, like a manual transmission and ski sheath 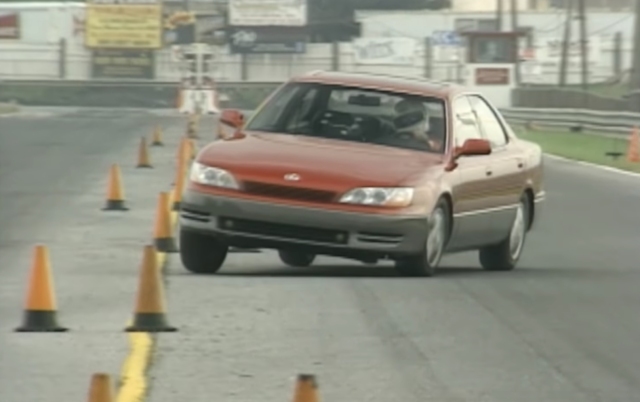 The Lexus ES300 was largely decried as a “Camry with a fancy badge” back in the day. It was a more than that, though, even if it shared the same platform with its mainstream cousin. And so what if it did? The XV10 Camry was arguably the best Camry every made, and the ES300 added a significant amount of equipment to justify its price tag. It had unexpected features too, like a manual transmission.

In period, the third-generation Toyota Camry was hated for its ubiquity. But there’s a reason it sold by the hundreds of thousands. Its ride is smoother than warm whipped butter, it’s a breeze to turn thanks to power steering so boosted a sunbeam could spin the wheel, and it’s near indestructible. Probably its only downside was its wide-ass turning radius and the fact that was not terribly engaging to drive (though compared to most cars today, its analog feel and excellent visibility practically makes it CRX).

Lexus-fied, it wore styling that Motorweek even called “sleek” while throwing out phrases like “low fenders,” “rakish back window” and “ducktail rear end”. Interior appointments were a big upgrade from the Camry, with two types of leather, an excellent upgraded Pioneer sound system, and Lexus’s sci-fi electroluminescent gauges. Personally we wouldn’t care about any of these things, but luxury buyers do, and that’s what mattered.

As Motorweek points out, the ES even featured a bespoke subframe and a hydraulic cooling fan to smooth out the vibrations coming from the engine. That’s more engineering put into differentiating the ES300 and Camry than the BRZ and 86.

Another thing the ES had that the Camry didn’t: a long expandable pocket for its pass-through rear seatback, made especially for holding skis. Imagine, not buying a 5,000-pound SUV with all-wheel-drive for the one time a year you take the family on a ski trip! When I was a kid I walked 10 miles to school, in the rain and uphill both ways.

Even better than the ski condom was the fact that Lexus offered the ES300 with a 5-speed manual, a carryover from the Camry V6. Mated to a 3.0-liter V6 good for 185 horsepower, 0-60 mph arrived in an impressive 7.9 seconds. It wasn’t going to turn your ES300 into a Skyline GTS-t, but it made the ES at the very least interesting.

Base price started at $25,250, which haters balked at. It was a natural progression, though, considering the base Camry DX started at $14,000 and change, while a top-of-the-line Camry XLE V6 started at about $20,50o. Nowadays, the Lexus ES is probably most cross-shopped with cars like the Mercedes CLA or Audi A4, but Motorweek measures it against the Acura Vigor, Mitsubishi Diamante, and Mazda 929. All of those models are long gone today, but the ES soldiers on with some amazing staying power, and this generation was the starting point.

1 Response to VIDEO: The Lexus ES300 had some unexpected features, like a manual transmission and ski sheath