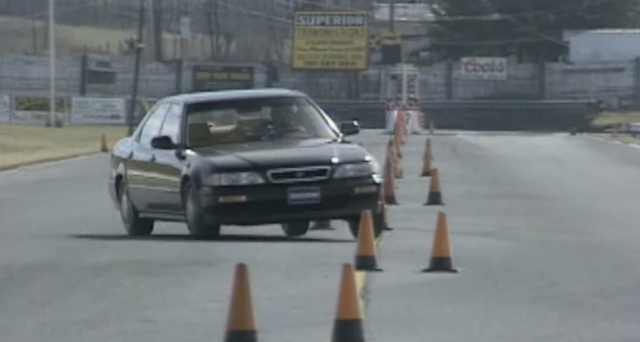 You have to admire the cojones on Acura. Legends usually take a while to establish themselves as such,  but they named their debut luxury flagship the Legend from day one. It was a class unto itself upon launch, but by the time the second-generation was due, the Japanese premium sedan segment had serious competition from Lexus and Infiniti.

Acura made the 1991 Legend bigger and more powerful, replacing the first-gen’s 2.7-liter, 160-horsepower V6 with a 3.2-liter, 200-horsepower mill churning out 210 lb-ft of torque. In an strange move, they mounted it longitundinally even though the car was front-wheel-drive.

This allowed for better handling, though it still exhibited significant body roll and was not as tight as a BMW 5er or Infiniti Q45. In their 1991 review Motorweek clocked a 0-60 time of 7.5 seconds with the 4-speed automatic. That was good enough to split the difference between the Q45 and a Lexus LS400, despite the fact that both rivals came with V8s. The 6-speed manual would have probably shaved at least half a second off that time.

Still, it returned a better performance than the outgoing model, despite being six inches longer and 300 pounds heavier. It also managed 19 city, 23 highway mpg, which was a few ticks better than a Lexus straight six at the time.

Prices started at $26,800. There was utter shock from the average consumer that a Japanese carmaker dare charge more than $25,000 when the first-gen came out, but Motorweek says that by 1991 most Acura shoppers were springing for the $34,200 fully loaded LS.

Ultimately, they really dug the Legend, calling it “one of the finest cars in the world today.” Looks like the name was appropriate after all.

6 Responses to VIDEO: The Acura Legend was aptly named