VIDEO: The Lexus LX450 was the Land Cruiser’s richer cousin, but today their fortunes have reversed 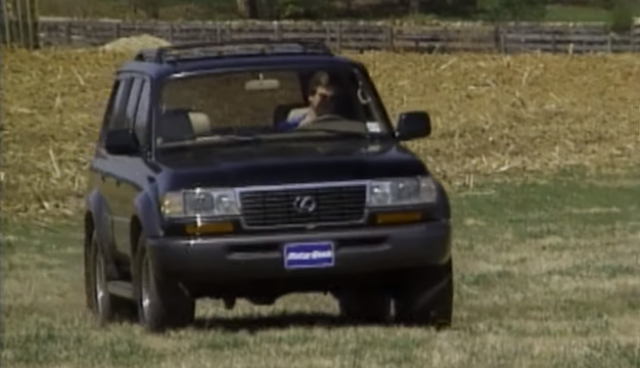 For years the 4×4 market has been hit with the Toyota tax, with a legendary reputation of indestructibility jacking up the prices of Land Cruisers, 4Runners, and pickups. When the Lexus LX450 debuted in 1996 with a $47,500 base price, little did Motorweek foresee that a low-mile, creampuff J80 Land Cruiser it was based on would command prices nearly three times that 25 years later.

The two-year production run of the LX450 was short lived, but the lasting impact it left on the luxury SUV world can still be felt today. The formula was brilliant, resulting in a design that is still benchmarked today. It was the perfect mesh of off-road prowess with serene Lexus-cabin opulence.

The 5,000-pound behemoth hits 0-60 in a leisurely 11.2 seconds, but no flagship would be complete without a 4.5-liter straight-six as smooth as Sade’s discography. The FZ-series churned out 212 horsepower and 275 lb-ft of torque, and its bulletproof over-construction meant J80 chassis vehicles have a minimum service life of 25 years.

Motorweek‘s test model was equipped with the very much desired option of front and rear differential lockers. It wasn’t cheap to buy or run, with a city mpg of just 13 and a highway mpg of 15 (though Motorweek‘s combined efforts yielded 15 mpg overall). The as-tested price of $52,498 bought you the automotive equivalent of a mastodon, however, a stout, unstoppable rig able to traverse any terrain on earth. It is no wonder that the model still carries the enthusiast flag, and will continue to do so high into the next ice age.

The LX started at $47,500 back in 1996, while the near identical Land Cruiser started at just $40,258. Today, though, the Land Cruiser weight carries so much weight that used J80 Toyotas are selling for slightly more than their Lexus equivalents. The Lexuses tend to have been better cared for as well, with owners less likely to have gone rock crawling with them. The Toyota tax shows so signs of receding, but if you must have an 80-series the Lexus LX450 does offer somewhat of a reprieve.

1 Response to VIDEO: The Lexus LX450 was the Land Cruiser’s richer cousin, but today their fortunes have reversed