VIDEO: The Geo Tracker should be your next overlanding rig 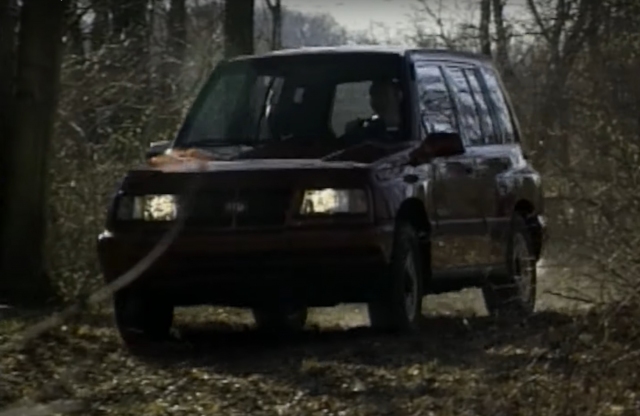 When you think Geo Tracker, your brain typically conjures the image of a convertible top, two-door, cute-ute, maybe in some jaunty color, maybe hanging out at the beach. But the Tracker, and the Suzuki Sidekick it was based on, had actual off-roading chops that should have made it a real competitor in the SUV wars of the mid-90s. With Land Cruiser prices skyrocketing, there’s no reason why the Tracker can’t be your off-grid apocalypse survival machine.

As seen in this Motorweek review of a 1996 Geo Tracker LSi, the four-door version had a lot going for it. Firstly, Suzuki never shied away from building true 4x4s, and no matter how small the platform, they underpinned them with ladder-frames and real off-road equipment like locking hubs and a 2-speed transfer case. As the video notes, its 7.5-inch ground clearance was greater than a Ford Explorer’s and despite the rugged construction cost $1,000 less than a car-based Toyota RAV4.

Power came from a 16-valve, 1.6-liter inline-four good for 95 horsepower and 98 lb-ft of torque, mated to either a 4-speed automatic or 5-speed manual. That’s not a lot of power, but even the four-doors weighed in at around 2,700 pounds, less than the mass of a modern Honda Civic. And as anyone who’s played Gran Turismo 2 knows, it has motorsports provenance as well in the form of Monster Tajima’s Escudo rally car that absolutely rips. The LSi came with oh-so-90s 3-spoke alloys, and a 4-wheel-drive version started at $16,025 (a 4×2 started at $14,885). That’s a fantastic bargain for what you were getting.

Tragically, they never sold in large numbers, making their current availability scarce. For armageddon-type scenarios, we’s have to recommend the four-door hardtop in order to provide your family members and scavenged gear some semblance of protection from bears and marauding bandits. Though this generation’s four-door Tracker only sold for three years, from 1996-98, the Suzuki Sidekick might give you more Craigslist returns as it had a quad-portal variant since 1991. In any case, this is one sleeper SUV you shouldn’t sleep on.

8 Responses to VIDEO: The Geo Tracker should be your next overlanding rig