VIDEO: The FJZ80 Toyota Land Cruiser was expensive in 1993 but it’s hard to beat its value today 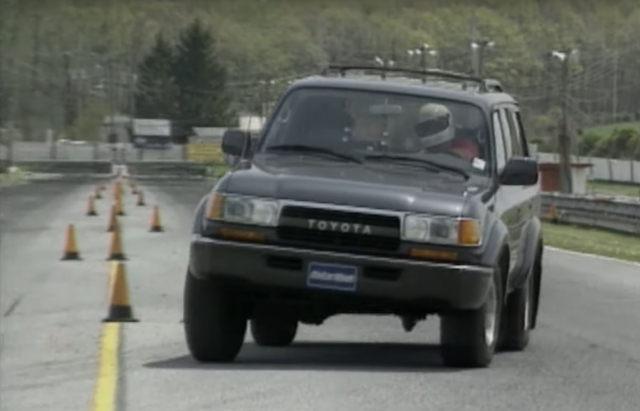 The 80-series Land Cruiser brought Toyota’s venerable off-roader into the modern age. The 70-series was never sold in the US, and as capable the 60-series was, by 1990 it was getting pretty ancient. The 80-series balanced perfectly the off-road capability of the older Land Cruisers while not delving into full-blown luxury mode that following generations did. Though the Supra existed, the 80-series became something of an unofficial flagship for Toyota, with a price to match. The updated 1993 model was reviewed favorably when new, but in hindsight it was drastically underrated.

Among the 80-series, the 1993 and up models were the ones to get. That’s primarily due to the all-new FZ-series engine, a twin-cam 4.5-liter straight-six with 4 valves per cylinder and port fuel injection. Its 212 horsepower output was a 37 percent improvement over the 1992 F-series engine, its 275 lb-ft of torque a 25 percent boost. NVH was reduced as well, and the FZ could push the 4760-pound behemoth from 0-60 in 11.9 seconds, shaving 2.3 seconds off the 1992’s time. Beyond the new mill, the 80-series was sprung with coils rather than leaves, had a 5,000-pound towing capacity, anti-lock brakes, rode on excellent Bridgestone Dueler H/T tires.

Back in 1993, Motorweek was suitably impressed, but thought it was a bit thirsty. It was rated at 12 city, 15 highway mpg, though they were able to achieve 16 mpg combined by driving gingerly. While they liked the car generally (we wouldn’t call their enthusiasm overflowing), they did balk at the $39,315 price of their loaded tester. A base 80-series started at $31,178, but it would have definitely been worth it to get the triple locking differentials. Not only would those have allowed you to scale the Empire State Building, nowadays that option alone doubles the price of a used 80-series.

They compare it to a Jeep Grand Cherokee, which at the time could be had with a V8 for $30,000, though it would have been a much less durable off-road with its unibody construction. On the other end of the spectrum, a Range Rover cost $45,000 and came with a V8 plus more luxury features.

Anyone that has been out days beyond cell service, though, will know that the Land Cruiser was the far better value. Its unassailable build quality and old-but-new looks has made it super desirable among off-roaders today. Even examples pushing 200,000 miles still sell for five digits, and mint examples with “low” mileage in the 125,000 range and triple lockers can trade for a few thousand below what base models cost when new. They may have seemed pricey in 1993, but if you had bought one new you’d be sitting pretty today, and laughing all the way to the bank with the money you’ve saved in repairs over the last 30 years.

2 Responses to VIDEO: The FJZ80 Toyota Land Cruiser was expensive in 1993 but it’s hard to beat its value today