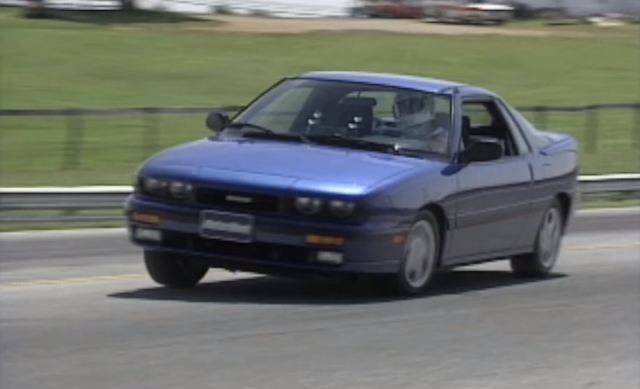 The second-generation Isuzu Impulse never got enough love. It was cheap, but not quite cheap enough. It was sporty, but not quite sporty enough, especially compared to the competition from Honda or Toyota. Isuzu was more of a truck brand than a car brand, and no one turned to them for a sports coupe. They were also under GM ownership so even the badge-engineered twin, the Geo Storm, had a bigger US presence than the Impulse.

In Japan, the Impulse was called the Piazza and, like the Giugiaro-penned first-gen, marketed for its European Styling. We suppose it does look kind of like a modern Lancia Beta Montecarlo, which is cool. In their July 1990 review, Motorweek was not a fan of the front-end styling, which they deemed too 80s. Those half-exposed headlights look pretty nice today.

However, when it came to non-linear performance, Motorweek found the Impulse with an unexpected spring in its step. Steering response was good, and Motorweek called the stick shift a “joy” (though they found the clutch mushy). It behaved more like a rear-wheel-drive car than a front-driver. The nose tucked and the tail stepped out in hard cornering, but on highways it kept a composed and smooth ride. They even got the outside rear wheel to lift on a slalom course but the car was never unsettled. That’s because it wore a little green badge that said “Handling by Lotus.” Both companies were under GM ownership at the time, and it was a rare instance when those corporate synergies actually synergized.

The interior looked dreadfully cheap though, even by 90s standards. The plastic was dull and the buttons hollow-sounding. The dash and seats had zero design, and even instrument gauges were just black discs with the most spartan markings imaginable. The Impulse XS was rated at 26 city, 34 highway mpg, so it had pretty decent fuel economy for its time.

It’s sad that Isuzu had to withdraw from the US market. If it had hung on for a few more decades, its reputation as an truck brand may have saved it in these SUV-happy times. We can’t even remember the last time we saw a second-gen Impulse in real life. It’s too bad, because it seems like the kind of car that, even with its shortcomings, would be an interesting drive today.

permalink.
This post is filed under: Video and
tagged: impulse, isuzu, piazza.