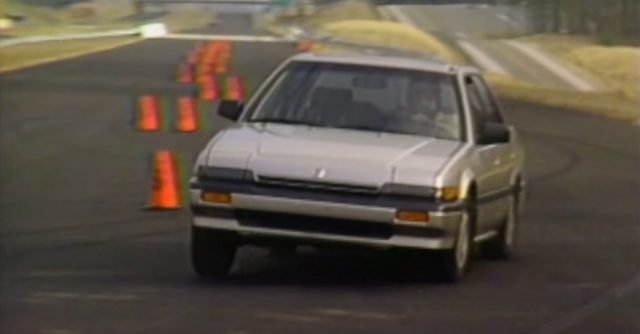 It’s no secret that we’re big fans of the third-generation Accord here, but how was it received when new? Motorweek said that it was making Detroit, which at the time still dominated the family sedan market, nervous. There’s good reason, too. Put this thing next to a Chrysler K-Car, a hugely popular model at the time, and it might as well be a UFO.

Motorweek tested a champagne (of course) top-of-the-line LXi sedan and had nothing but praises to sing. The styling was futuristic with snazzy pop-up headlights, the dashboard a masterclass in ergonomics, and the sound insulation luxury sedan-like.

Even with the optional 4-speed automatic, its responsive 2.0-liter, 12-valve engine earned plaudits, and its 110 horsepower and 114 lb-ft of torque launched the car from 0-60 mph in 9.7 seconds. Yet, it was efficient too, underrated at 23 city, 29 highway mpg (Motorweek got a combined 30 mpg in mixed-cycle testing).

Though they dinged it on body roll, that seems like a picked nit. What sedans at this price range were offering a double-wishbone suspension at all four corners?Speaking of which, the DX started a mere $8,000 while the range-topping LXi rang in at $13,700. But, as proof of the Accord’s magnificence, dealers at the time were marking them up to an eye-watering $18,000.

And yet, this was the generation that finally toppled the Big Three’s stranglehold on the sales charts. In 1989 the Honda Accord became the first import to take the title of America’s best-selling car. That year also happened to the final model year for the generation. Unfortunately for Detroit, they hadn’t seen nothin’ yet.

permalink.
This post is filed under: Video and
tagged: accord, Accord 3g, honda.

4 Responses to VIDEO: The third-gen Accord was when Honda began to eat Detroit’s lunch