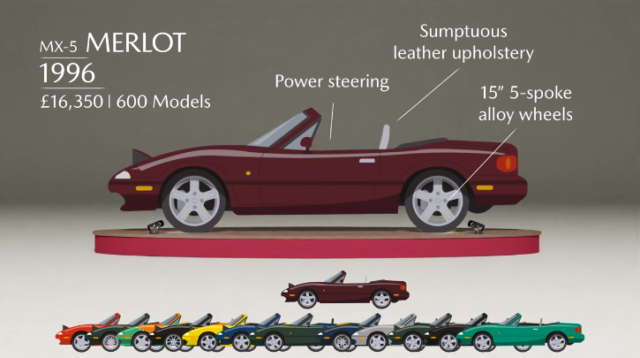 The Mazda Miata has had a ton of special editions over the years, and we’re talking just the US models. When you account for all the Miatas sold in all the different markets around the world, their numbers are seemingly countless. To help us along, Mazda UK has released a trio of videos celebrating that country’s exclusive special editions of the world’s best selling roadster.

The first video naturally chronicles the NA, starting with the BBR Turbo model, whose 850 units were actually available in red, white and black. Interestingly, the 1991 “British Racing Green” color we got stateside is known simply as “Limited Edition”. The list goes on, with most of the thirteen models given British nomenclature. Some of the names sound downright wacky to us, like the final Sparkle Green “Berkeley” edition, named after the luxurious hotel in Knightsbridge, London. Mazda ran a sweepstakes for a weekend getaway at the famous hotel if one would arrange a personal viewing of the special edition car with their local dealer.

Perhaps the biggest standout was the 1991 Le Mans edition, painted in the orange and green livery of the Mazda 787B. They were quite expensive for the time, but limited to only 24. Apparently, three owners couldn’t live with the loud colors and repainted them in plain colors. We’re betting they regret that now.

The NB video takes us through 17 models, many of which remind us that the second generation of the car ushered the nameplate into the 21st century. It can’t get any more 2000’s than the “Euphonic” edition, which came equipped with a cutting-edge (at the time) Sony CDX-MP80 CD/MP3 player with motorized fascia plate, Sony Xplod speakers, and a trunk-mounted Sony six-disc CD changer. The “Angels” edition was released alongside Charlie’s Angels: Full Throttle in 2003, and featured Angels-badged special scuff plates and fender trim. Some of the other models, interestingly, are named after certain US states.

The NC models have a lot of Japanese names and anniversary editions. The “Niseko” is named after the ski resort town in Hokkaido, evidenced by its 33Y Icy Blue Metallic paint code. The 2011 Black Tuned edition came in the unmistakable Spirited Green, which we only got stateside in the Mazda2. It was the MX-5 that started Mazda’s design trend of black power-retractable hardtop and black front grille accents. Interestingly, the same car was called the “Karai” edition in Germany, which translates to “flower buds”, a reference to green vegetables such as broccoli and cabbage.

The “Kuro” brought back the A3F Brilliant Black paint code from the NA, and its exterior flair such as the red and grey rocker stripes symbolize Mazda’s aspirations in motorsports. NC Special Editions ended with the Sport Venture, featuring two mica paints of Titanium Flash and Deep Crystal Blue. 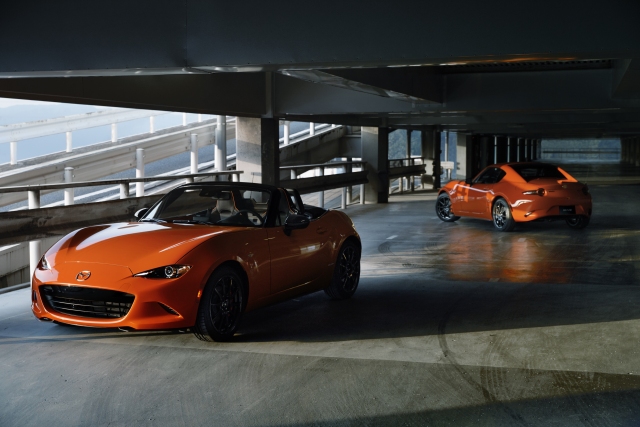 We are anticipating a future video of the ND/MKIV, highlighting the 30th Anniversary along with the UK-exclusive R-Sport. And yet, these special editions do not fully convey the expansive color palette all four generations of MX-5 have brought to the automotive kingdom.