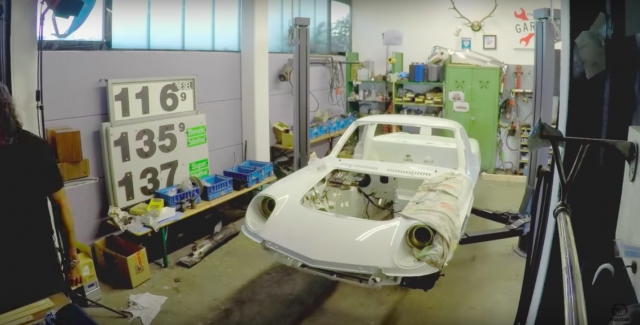 Mazda Germany’s Cosmo Sport saga is finally complete. In the last batch of episodes, the car has gone from rust-holed barn occupant to show-worthy classic. If you’re new to the series, see parts 01 and 02, then watch the rest below.

In episode 9, the car is at the paint shop and has come off the rotisserie in gleaming white. Co-host Det Müller lends a hand prepping and painting the doors, trunk and hood. Meanwhile, at another shop the rear axle is being reassembled from drum to drum. Meanwhile, co-host Cyndie Allemann returns from Japan with parts, and the Mazda 6 Wagon tow vehicle has been replaced with a new CX-5.

At the Sattlermeister (upholsterer in German), the original houndstooth fabric retrieved from Japan is brought to replace the old seat coverings. Though the old ones are horribly faded, it still pains us to see the upholster slice into them like Jack the Ripper. Except, he reveals that the worn fabric wasn’t original — the true original upholstery is underneath, very torn with foam that’s turned to powder. The painted car returns to the shop and the axle is installed.

In the eleventh episode, the parts come together. All the hard work of hunting down parts, restoring the body, teardown and reassembly of the drivetrain and suspension is complete. Now comes the fun part of putting together a three dimensional, thousand-piece puzzle.

The series concludes with a mechanical test. The rotary fires up and comes alive, and the co-hosts take it out of the garage for the last time. The car will run in the Hamburg-Berlin Klassik Rallye starting tomorrow, August 24.

Overall, the series as good, but we wish it had been longer, with more time spent shown restoring and rebuilding individual parts. While it’s true that most viewers probably don’t care how a hose clamp was electroplated or whatnot, some of us geek out over that stuff. They don’t even show the rebuild of the rotary engine. By watching the videos, what would have taken months is condensed down to an hour. In any case, it’s great to see a car show focus on a rare Mazda rather than the umpteenth Mopar, even if it’s all in German.

For our German-speaking readers, here are some bonus episodes. The first is a question and answer session with Walter Frey, the Cosmo Sport’s owner and Mazda importer. The second is Senji Hoshino, restorer and owner of Garage Star Field, talking about why he has devoted his life to the Mazda rotary. Lastly, a video from another series, but clearly filmed during the same time as this one, has Cyndie Alleman, who is a professional race car driver, checking out dekotora and drifting in Japan.

permalink.
This post is filed under: Video and
tagged: cosmo sport, Germany, mazda.