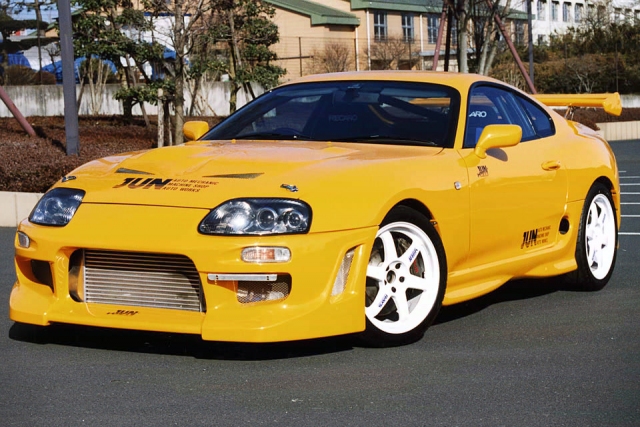 As we mourn the loss of Jun Auto Mechanic founder Junichi Tanaka, let’s take a a look back at some of his incredible creations. These were, for many enthusiasts, the dream cars that hooked them on Japan’s tuning culture. Though decades old now, the passage of time has not made these cars any less impressive.

First up is a short but oh-so-sweet video of the Jun Akira Supra, which the company sold as a complete car back in the glory days of tuning. With a 2JZ-GTE stroked to 3.2 liters on Jun internals and Trust turbochargers, it put out 800PS (789 horsepower) and 644 lb-ft of torque, it was an absolute monster capable of engulfing the entirety of Tsukuba Circuit in tire smoke. The nonchalant chuckle at the end of the video says it all.

As we’ve said, Jun was capable of building a wide variety of cars for drastically different purposes, but each one was at the top of its game. Here’s a 246-horsepower EK Civic hatchback weighing just 2,095 pounds attacking Tsukuba Circuit in the the wet. Note that the modified B16B engine has a redline of nearly 10,000 rpm.

The Honda Prelude was not a beloved car in Japan due to its weight and tax class, but Jun wanted to show how capable it was. So, they created the ultimate BB4 Prelude, with a built H22C making 220PS (217 horsepower). In these Best Motoring video, Keiichi Tsuchiya seems skeptical at first but comes away with a newfound respect after a spin around Tsukuba, where the Prelude lays down a better lap time than the Civic above, even with full interior, aircon, and ABS.

In this Hot Version video, the same Prelude defeats a pair of tuned S2000s in a touge battle.

Jeremy Clarkson was similarly wowed when he test drove the Jun R33 Skyline GT-R, at the time one of the fastest cars in Britain. The specs would embarrass a supercar even today: 0-60 in 2.8 seconds, 0-190 mph in just 12 seconds, and a 234 mph top speed (despite having the aerodynamic profile of a Maxima).

Jun’s preferred test circuit was Tsukuba, and the company frequently used it a as a test course. Even Japan’s famous rainstorms couldn’t stop them from performing a shakedown of their Z33, bored and stroked to 3.8 liters, it generates 817 horsepower, 696 lb-ft of torque, and an otherworldly sounds.

Jun broke the Tsukuba Circuit lap record several times in several different cars. Here’s video of their S15 cooking it for a sub-minute lap time, as well as the record-breaking Mitsubishi Lancer Evolution V that clocked a record 0’57″301.

Jun was able to produce such incredible machines due to their expert craftsmanship and precision engine building. In this video showing the creation of the 420GTR, an R35 capable of an mind-melting 1,510 horsepower and 1,100 lb-ft of torque. The VR38DETT motor, bored and stroked to an astounding 4.2 liters, is a work of absolute art.R33

Last but not least, here’s an overview video of the company, with drool-worthy footage showing the milling of a billet crankshaft. There’s also clips of their Toyota FT86 build, and a montage of the truly amazing cars that the shop has built. Incredibly, these videos depict just a fraction of the company’s accomplishments over the years. And sadly, though Junichi Tanaka has left us, each time we see one of these hyper yellow machines we will think of him.