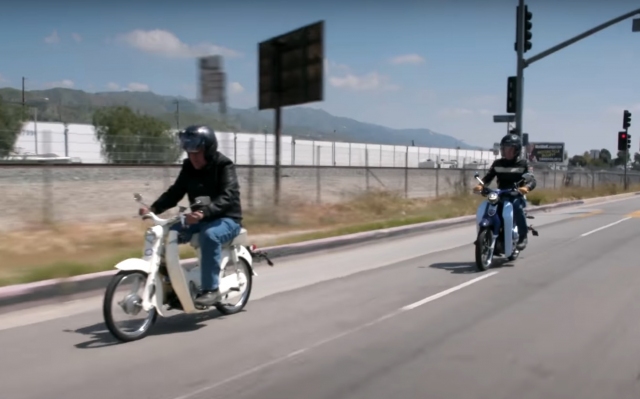 When it comes to Japanese vehicles, Jay Leno’s Garage has been most entertaining when they’ve been about Honda bikes. The host has a true affinity for them in a way that’s not always there when he’s talking about, say, a Toyota Supra. It also doesn’t hurt that his first bike was a Honda, and is of the generation when Hondas entered the US market and transformed the face of motorcycling in America forever.

In this episode, Leno rides both an original 50cc version and the new 125cc Super Cub. It’s interesting to see the two side by side, separated by half a century of evolution in continuous production. The new version now has nine horsepower instead of four, four speeds instead of three, and disc brakes with ABS.

Throwback design touches grace the new one as well. For instance, the original air filter access panel has been duplicated by a chrome cap just for looks. The 125’s grips mimic the tape wrap used on the original. The only color available is a tribute to the original’s dark blue and light blue — which represented the sky and sea — and red seat inspired by Soichiro Honda’s shirt. 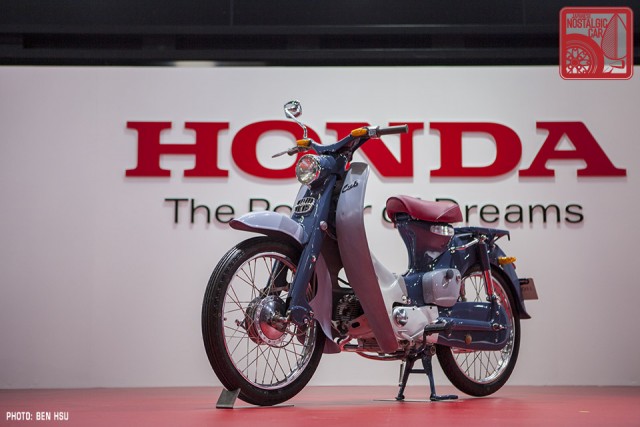 The original, of course, is the best-selling motor vehicle of all time, with over 100 million moved. The video is chock-full of interesting stats. The original could achieve 100 mpg. The Super Cub’s tires became a standard size because of their ubiquity. Soichiro Honda insisted on an automatic transmission so you could carry your ramen while riding it. At the height of its popularity, Honda was making 1,000 Super Cubs a day.

Leno fondly recalls that despite being sold for just $215 when new, these Hondas were utterly reliable and, unlike the European bikes, oil tight. Haters tried to pick it apart — the pressed seam on the muffler was called a indicator of cheapness — but they turned out to be far more durable than most bikes of the era. Leno also laments the fact that in America vehicles are seen as so disposable, in contrast to a vicar he meet in England that’s been using the same Honda bike for 40 years. As a result, early examples aren’t as common as you would think for a model that’s sold so many. If you can get past the countless dad jokes about the power output, it’s a video well worth viewing.