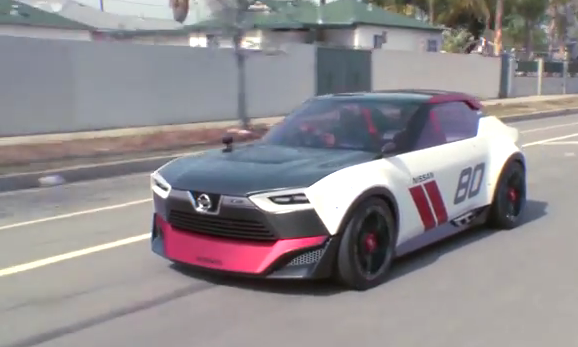 Nissan has been parading their IDx concept cars all over SoCal recently, and this weekend they ended up in the garage of car enthusiast and comedian Jay Leno.

Arroba, who was responsible for the current Altima, Maxima and Titan, explains that the three-box, front engine, rear wheel drive design resulted from a unique collaboration between Nissan designers and younger Nissan employees (shout out to friend of JNC DesignerD), who were asked what elements would appeal to Generation Y. He describes the concept as, “[Not] an appliance that gets you from Point A to Point B, this is all about fun and excitement, and getting people excited about Nissan.” Leno praises many of its aggressive, Japanese elements, notably the fender flares and the classic-race-inspired fender  rearview cameras.

We’ve been told that the concept was based on a Silvia, likely S15, chassis so it is in fact drivable, and Jay takes Nissan’s newest pride and joy around the streets of Los Angeles. The gorgeous greenhouse created by the “floating roof” is made even more evident in the video, showcasing a much open, airy interior, a nice break from today’s rising beltlines and claustrophobic cabins. The prototype seems to be too functional, as Leno accidentally opens the door while reaching for the door pull-latch! Watch the hilarity unfold above.