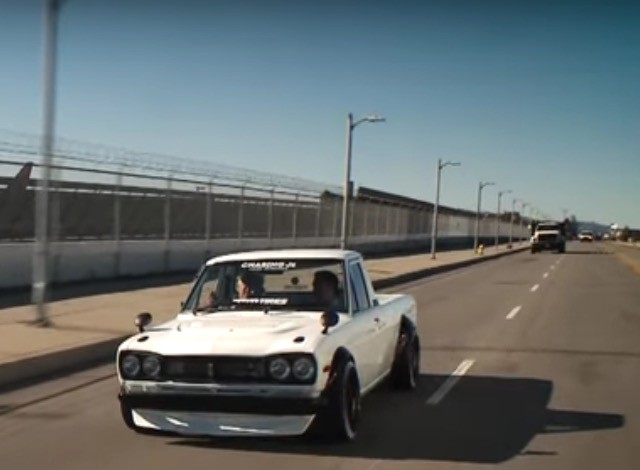 When the Japanese builders at 09 Racing debuted their Hakotora at the 2013 Tokyo Auto Salon, it was easily one of the most talked-about cars at the show. The name comes from the blending of hakosuka and sanitora, the Japanese nicknames for the C10-generation Skyline and the B120 Sunny Truck, respectively. Who would’ve thought that one day, there’d be one driving around in Burbank with an SR20DET under the hood and Jay Leno behind the wheel? 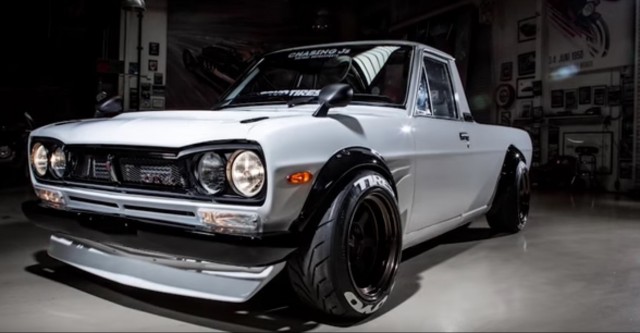 This particular car belongs to Dominic Le, who used a 1974 Sunny Truck as its base. Though we got the B110 generation Sunny in the US in the form of the Datsun 1200, we never received the unibody truck body style. It was, seemingly, sold everywhere else in the world, however, including South Africa until 2008.

The Sunny truck is still hugely popular in Japan, no longer as workhorses but as shakotan rods. It was only natural that someone would think to graft onto it one of the most iconic noses in Japanese automotive history (callbacks are a thing at the Auto Salon). But while it looks like this Sunny ute is wearing a hakosuka mask from the windshield forward, actually the entire front end was created from scratch by 09 Racing because of the size difference between the two cars.

Dominic’s Hakotora was a top 21 finalist at last fall’s Battle of the Builders at SEMA, where it caught the eye of Jay Leno. Watch as they visit Mr. Leno’s garage below: