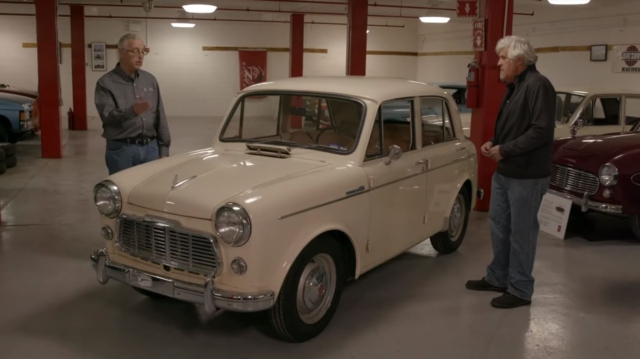 In the latest episode of Jay Leno’s Garage, the collector and host visits the stateside Nissan Heritage Collection in Franklin, Tennessee. In the first half of the video, he tours the collection but when it comes time to pick a car to drive, he skips right past the 240Z, 510, and Patrol and jumps into a Datsun 1200 Sedan. 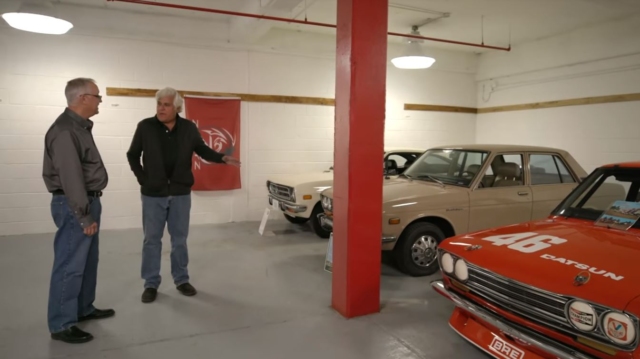 The video provides some all-too-brief glimpses of some of Nissan’s cars, including a 240Z, Mr K’s own yellow 260Z 2+2, a street-driven Datsun 510 as well as the championship-winning BRE race car, and an example of Leno’s second car, a Datsun Fairlady Roadster. In recent years Leno has grown to review the cars in a more objective manner, rather than discounting Japanese cars right off the bat.

In fact, he’s sometimes more sincere about the greatness of a car than the owner itself. During the tour, the curator of the collection says of the Datsun 510, “This was a price point entry to the sports sedan market. It was a threat to the BMW 2002 at the time,” but then walks back that statement by adding, “Not a threat to the car, but calling to the same sort of customers.”

This is, of course, false, as the 510 was in many ways superior to the 2002, a fact proven on race tracks of the day. Not only did the 510 win multiple championships at BMW’s expense, SCCA grids were  positively flooded with them, with about three 510s for every BMW. Leno mentions that the 510 went on to become the “hot rod ’32 Ford of kids in the mid 80s and early 90s,” reflecting the car’s success both on and off the track.

For the latter part of the video, Leno insists he wants to drive something really early. The answer was a Datsun 1200 Sedan, which alongside the 221 pickup was one of two models that Nissan entered the American market with. Though described as a 1960, in all likelihood it was a 1959 model, as the 211 chassis ended production in July of that year. By August 1959, the much more advanced Datsun 310 had already supplanted the 211 on the assembly lines.

The drive is thoroughly enjoyable to watch, and it’s impressive to see the 211 taking to the streets (in a downpour no less). Leno is struck by the build quality of the car as they chat about Nissan’s early years, including the competition success of a pair of 1958 Datsun 220 sedans, Fuji-go and Sakura-go, and their conquest of the 1958 Australia Mobilgas Trial.

Though he does have to cater to an older and more casual audience,  no one but Leno would drive the 221, and that’s what makes videos such as this one interesting. This is one of the better episodes covering Japanese cars, and well worth a viewing.