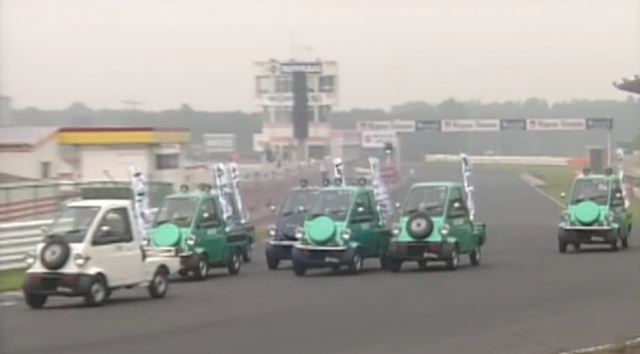 The brilliant thing about Best Motoring is that one day you get an epic AE86 track battle, and the next day you get antics rivaling 2002-era Top Gear in silliness. Take this 1996 episode, for example. Daihatsu had just resurrected the Midget II delivery truck, a bug-eyed, 31-horsepower kei pickup offered mostly in green. Still, it was quite a technological leap from the Midget I, which had only three wheels. Best Motoring then raided the local Daihatsu dealer and put Japan’s top drivers in a flock of them.

Motorharu Kurosawa may have won the 1962 All-Japan Championship motorcycle series, piloted a Skyline GT-R to multiple wins as a Nissan works driver during the Hakosuka‘s glory years, and clinched the checkered flag in the V12 Nissan R382 at the 1969 Japan Grand Prix, but that was clearly no preparation for the greatest challenge of his lifetime — flogging a one-seater delivery truck with a spare tire mounted on its hood. It is one of the most hilarious races we’ve ever seen, and we firmly believe this episode is the only reason the Midget II appeared in Gran Turismo.