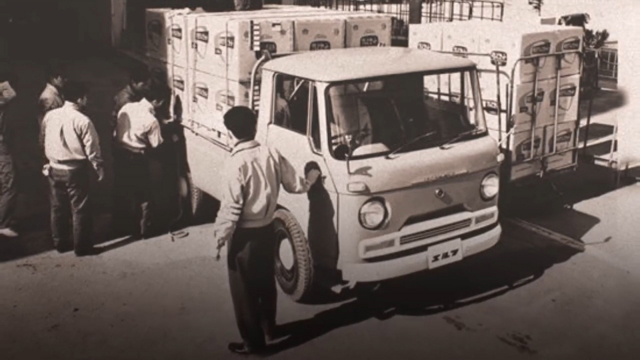 The Elf is to Isuzu what the Land Cruiser is to Toyota or the Skyline is to Nissan. At 61 years old it’s the longest running nameplate in Isuzu’s history, and a truck that can be seen in almost every corner of the globe (including the US, where it’s rebadged as a GMC W-series. Unless you’re living in a unabomber cabin in the woods, chances are that something you own has been on an Isuzu Elf.

It’s no coincidence that it was named for hard-working little sprites, the kind that help a rotund old man build toys year round in the Arctic circle. Isuzu wanted to convey the tireless attitude of these magical creatures, and early ads even featured a jaunty little dude in a pointy hat as a mascot.

Introduced in 1959, the trucks initially sported a 60ps 1.5-liter gasoline engine. A few months later, the 1960 models added a 2.0-liter diesel motor, allowing it to surpass the popular Toyota Dyna in sales. Soon, other manufacturers began to equip their light-duty trucks with diesel engines too but the Elf continued to be a class-leading pioneer and top seller.

Isuzu has been digging into its archives for photos of its most iconic vehicles. These rarely seen images usually end with a fade to color and an example of said vehicle from Isuzu’s own museum collection in action. Incidentally, this very truck has been showcased at the New Year Meeting, where it even arrived and left on its own Isuzu transporter.

permalink.
This post is filed under: Uncategorized and
tagged: elf, isuzu, trucks.

1 Response to VIDEO: The Isuzu Elf had a cute name but did massive work