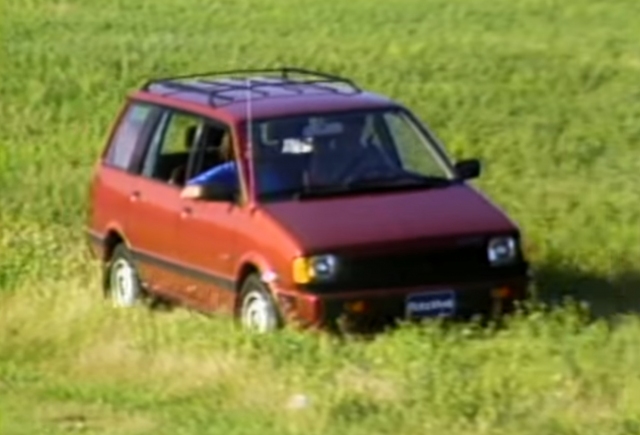 These days, three-row CUVs are big, hulking things that blot out the sun when they lumber into your general vicinity. Back in the 80s, however, Mitsubishi built a 7-seater, all-wheel-drive wagon that basically does 90 percent of what a modern Nissan Pathfinder can do. Though it was sold as the Dodge or Plymouth Colt Vista, in Japan it was called something much grander befitting of its all-around versatility: the Mitsubishi Chariot.

Sure, its sheetmetal skin was about as thick as a beer can, but that’s because the engine only had 88 horsepower. With a curb weight of 2,580 pounds, that kept the mileage to a rated 19 mpg city, 24 mpg highway — and it still had 86 more horses than the Roman carriages of its namesake. Plus, Motorweek was able to extract 24 mpg combined in mixed conditions during its testing.

Furthermore, the second row folded flat to form a sort of mobile love shack that ensconced occupants in the luxuriant wine red velour. It had plenty of cubby holes for storage, came with an optional a limited-slip diff that cost only $158, and was offered in a manual transmission with a nifty little real-time 4WD activation button right on the shifter!

Acceleration was sluggish and it leaned like the tower at Pisa in cornering, but with a starting price of under $10,000 perhaps those shortcomings can be overlooked. It makes a great little runabout for both #citylife and #vanlife, and probably should be more appreciated than it is. The last time we saw one on the road was probably over 15 years ago. Chariot; it’s what the Mitsubishi Eclipse Cross should have been called.