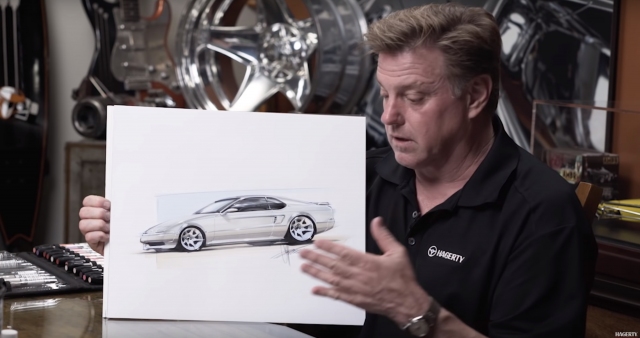 We recently learned about Chip Foose’s new video series, in which he applies his designer’s touch to popular classics, when he drew his interpretation of an FJ40 Land Cruiser. Turns out, he drew an AW11 Toyota MR2 as well, reimagining it as a fastback. First, though, a trigger warning. If you like your A-dub, you’re not going to like what Chip Foose has to say about it.

Foose absolutely hates the MR2’s production looks. He prefers the smooth-lined 1981 Toyota SA-X prototype that came before it, and says the production version looks like a kitchen appliance. Charitably, we will say that he’s probably just not a fan of the 80s techy, angular look. But when he says that it’s awkward and doesn’t look sexy, elegant, or masculine, that starts to feel a bit personal.

Foose’s solution is to soften the lines, stretch out the wheelbase, and give it the rear end of a 1969 Mustang resto-mod. But part of the AW11’s appeal was the very fact that Toyota could use drivetrain bits, accessories, steering and brake parts from other models and standard 14-inch wheels to make the car affordable. Or as Foose calls it, a cheap production car, like a toaster.

All those sharp angles and edges were part of the car’s identity. It personified the 80s in the same way a Buick Riviera was emblematic the 60s. It aligned with the rest of the Toyota sports car family — A60 Celica Supra, AE86, — at the time. If it was pebble-smooth like the concept, it wouldn’t have been cool enough to star in 80s revival electronica videos, and if it had been as exotic as Foose’s drawing it would have been lost to history in a sea of mid-engined supercars. The MR2 was an everyman’s midship sports car, with a unique enough design as to not ape more expensive exotics and a reputation that has withstood the decades far better than its contemporary rivals from Michigan and Turin.