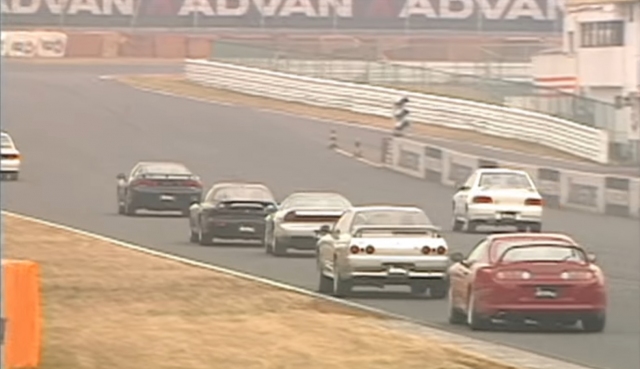 By 2020 the 25-year threshold of what constitutes a classic car will cut off at 1995. What was the best Japanese car of that year? Back then, Japan’s Best Motoring sought the answer in a series of videos pitting several classes of cars around Tsukuba Circuit for the 1995 Car of the Year series.

First up is the kei jidosha class, and entry cars include the Daihatsu Mira TR-XX Avanzato R, Suzuki Alto Works RS/Z, Subaru Vivio RX-R, and Suzuki Cappuccino. Just for fun, though, the hosts threw several icons of the RV (recreational vehicle) class into the mix, including the Toyota Estima s/c
Honda Odyssey, and Toyota RAV4. The Alto wins, but watching the pretty evenly matched minivan pair duke it out is more entertaining than The Irishman.

Next is the sedan class, which includes the Nissan Cefiro Eximo G, Toyota Camry Touring, Mazda Capella Zi, Honda Accord SiR, and two imports in the form of the Ford Mondeo Ghia and Mercedes Benz C200. There’s also some bonus high-speed slaloming of a Toyota Celsior representing the top of the luxury class and a Mazda Familia 1800 Interplay X representing the top of the compact sedan class. In the end, it is the C200 that wins the most votes from the hosts, with the Accord, Celsior, and Familia tying for second.

In the 2.0-liter sports class, we have favorites like the SW20 Toyota MR2 Turbo, S14 Nissan Silvia K’s Type S, Mitsubishi Lancer Evolution II in both RS and GSR trims, ST205 Toyota Celica GT-Four, and Subaru Impreza WRX-RA. After a brief section showing the Japan Car of the Year Awards, which is won by the Mitsubishi FTO, the hosts conduct a bracket drag race which ends in a dead tie down to the same thousandths of a second for the Impreza and Evo RS. Then comes a track battle where the GSR, WRX, and RS come in 1-2-3. However, when it comes time to choose a subjective winner it is the MR2 and WRX that tie with the most votes.

Lastly, it is fastest class, pitting the top domestically produced cars against each other. Entrants are the Mitsubishi GTO MR, Nissan Skyline GT-R V-spec II, Toyota Supra RZ, Mazda RX-7 RZ-II, Honda NSX-R, as well as the Mitsubishi Lancer Evolution II RS and Subaru Impreza WRX-RA from the 2.0-liter class. Test is conducted in two heats on the circuit, with a driver change in between. It should probably come as no surprise that the NSX-R wins it all, including the drivers’ points ratings.

Of course, for a truly objective test a time attack format would have worked better. But as is the case with Best Motoring‘s comparos, the track sessions are more for high drama and the commentary from the experts.