VIDEO: And now for your viewing pleasure, Hakosuka drift! 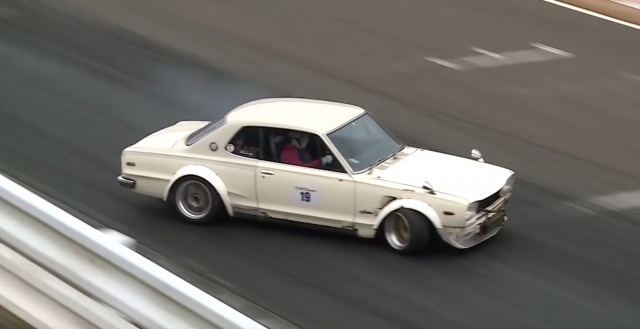 We were quite taken by this Hakosuka when we came across it in 2016, even though it might just be one of the rattiest examples to set a wheel into a car show. But, there’s a reason for its battle-scarred appearance — it’s a drift car.

In this recent Hot Version video, they catch up with the owner, Tojo-san. He reveals that the chose this car for his tail-out antics because of Shakotan Boogie. Though the Hakosuka was known for inspiring the art of drifting at the hands of Kunimitsu Takahashi, to get the car to handle on a modern drift circuit Tojo-san had to make some heavy modifications like relocating the struts.

For the track, it has thankfully shed its dry-rotted, but incredibly rare Bridgestone RA-300 tires. Amazingly, it still runs an L-series and is not without a sense of humor. On the valve cover where “Nissan” should be, it reads ossan, which means “old man” in Japanese.

1 Response to VIDEO: And now for your viewing pleasure, Hakosuka drift!