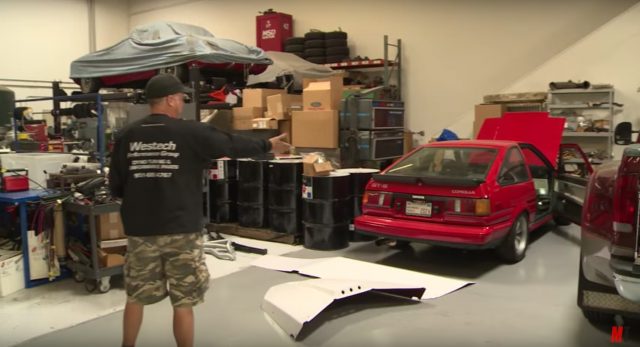 In a recent episode of Roadkill Extras, host David Freiburger is at Westech Performance in Mira Loma, California when he’s rendered utterly dumbfounded at the presence of an AE86 wearing California Historic Vehicle license plates. Turns out, it’s a car we featured back 2009 and is owned by our friend Dennis David.

Dennis says he was merely there to get it dynoed when rhe film crew stopped by. The normally gregarious Freiburger seemingly doesn’t know what to make of the “…Corolla” but it’s not like Roadkill hasn’t had its share of J-tin. There was the V8-powered Datsun 240Z, some kind of bizarre Z-based game of Horse, and a boat-engined REPU. Hmm, maybe it’s best these guys continue thinking it’s just a plain ol’ Corolla.