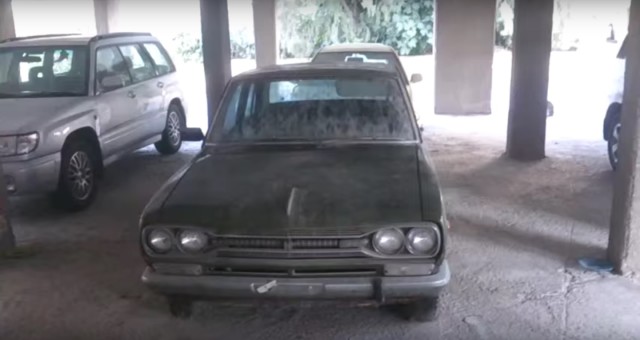 The story of a Toyota dealership abandoned in Cyprus in the 1970s is well known to long time readers. Apparently, though, old Celicas and Corollas aren’t the only J-tin left to gather dust on the island republic. Here’s a very complete 1969 hakosuka sedan too. To be clear, it’s not within the Green Zone, the demilitarized buffer whose residents were forced to flee in 1974 (and where the Toyota dealership resides). Instead, the Skyline is just sitting in an apartment complex, seemingly abandoned, but some members of the Hakosuka Owners Club on Facebook did some investigations.

The lowdown is that the car was owned by someone who hadn’t used it in 20 years.  Sadly, he’s since met his maker, and the car is caught in a bureaucratic no-man’s land, where it would be too much paperwork to release the car to someone else.

It’s a shortnose four cylinder Hako, but seemingly very complete and dry-stored, so there is little evidence of rust.  Let’s hope the Cypriot powers that be, manage to find a way to let the car into a deserving new home.