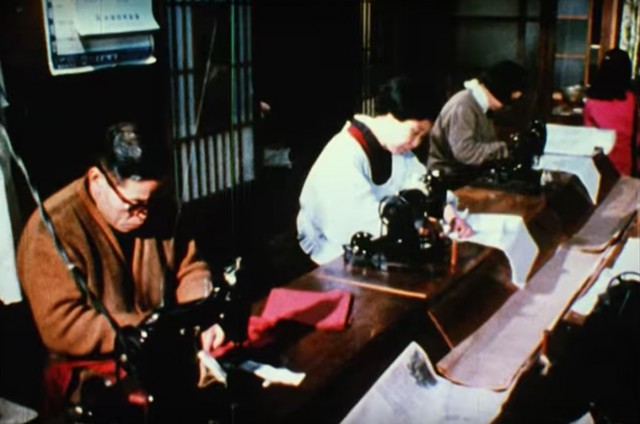 Here’s a video, perhaps in the same grade-school documentary series as the one about Japanese industry in the 1970s. It has no cars, but you can still learn a thing or two. In particular, there’s a scene showing a family-owned sewing business (6:19 in the video below the fold). In the small home, a family might live in one room, while a “factory” occupied another. It is difficult to describe the scale of such an operation without visuals.

“The family contracts with big companies to make or assemble parts of a product.” Many times, this would have included contracts with large automotive companies. Order a few thousand widgets from the Yoshimuras, order another few thousand from the Watanabes. They would be identical and built to spec.

Here’s an article from 2009 Japan Times article about Nissan Chuzousho Ltd., a Nissan parts supplier that was the last surviving beigoma company in Japan. Said the 62-year-old owner Shunichiro Tsuji, “In my city, Kawaguchi, within just a one- or two-km radius, we can make the parts for, and put together, anything: a truck, a plane, or a robot. There are hundreds of tiny factories like mine that manufacture the most important parts for any product you can think of. Even a space rocket!”

Family-owned companies like this were key to the fabric of Japanese culture. It may seem at first incomprehensible to western businesses. Why not just buy 200,000 widgets all from one big company?

It was because of, as this Australian National University report says, the traditional Japanese idea of a business existing for society. That’s a reversal of western, especially American, thinking, where corporations feel no obligation to be good citizens. Japan, as a whole, understood that the more people that were kept employed, the stabler society was, which in turn kept the the economy churning and crime off the streets.

It wasn’t just a one way street, either. The large companies maintained personal relationships with the suppliers. This included education and training, sharing predictions of where the market was going. If the prices got too expensive and the automaker had source parts from another company, they’d find something else for the family to make rather than just drop the contract.

Sadly, Nissan’s network of 3,000-plus suppliers was one of the first things Carlos Ghosn all but obliterated when Renault took a controlling stake in Nissan. That, and lifetime employment. The western model was adopted and soon other Japanese makers had to follow suit. While the old system still exists, it has been much diminished, even at companies like Toyota.

It’s true that Nissan had many other inefficiencies and problems that had pushed them to the brink of bankruptcy. Perhaps it was always going to be the case that Japan would have had to change eventually. In any case, part of Japanese culture had been lost. That is why today Nissan is described by some Japanese industry watchers as “a French company with a Japanese name.”

Thanks to YouShouldVisitJapan.com for the video!

permalink.
This post is filed under: Video and
tagged: industry, nissan.