It’s hard to find the balance between power and purity when restoring a classic. We all love to go fast, and the light weight of old school J-tin is a great starting point for the vintage racer of your dreams. On the other hand, as owners of now-rare cars we feel a responsibility to preserve these rolling history lessons for posterity. What to do? Jason Humble seems to have found the answer with his Mazda RX-2. 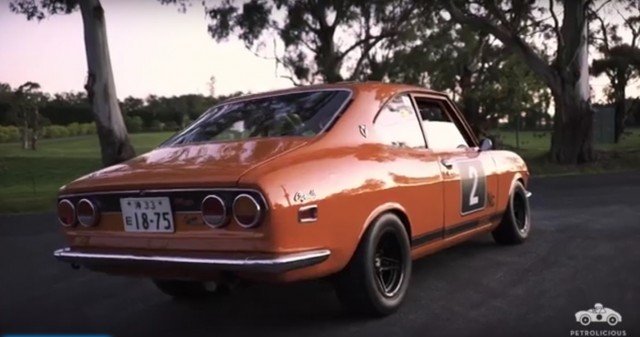 As subject of the latest Petrolicious video, Jason tells the story of his beloved Mazda. He became enamored with the RX-2 early on, but he was also a die-hard devotee of the circuit thanks to his racer dad. When it came time to build his own RX-2, he came upon a flat black shell that had been someone else’s discarded project. It would’ve been the perfect start of a sex-spec resto-mod.

Instead, Jason built a proper vintage racer, with properly-sized wheels, a 12A rotary and even resprayed it in the correct Herschel Orange, the car’s original paint code. “It’s a real genuine take on what the car should’ve been in the day,” explains Jason. As a result, he gets to compete in Australian vintage racing classes for 1965-72 cars where he dices it up with Falcon GTs, Camaros and Mustangs.

Thanks to his car, Jason now gets to drive alongside some of his racing heroes. Through it all, Jason stays humble. Yes, that is his last name and it’s written on the side of the car, but its also the perfect adjective to describe him. After every race, he gives the car a once-over and cleans it thoroughly. It’s as much for looking good as it is to spot any potential leaks or other maladies: “You can really get a feel for what your car is trying to tell you.”

Listening to Jason talk about his RX-2 is like hearing a traveler speak about his horse. It’s not there just for speed and kicks, and definitely not for making him internet-famous. It’s something he respects, and proves it is possible to go fast while staying true to the car.

3 Responses to VIDEO: A giant-killing Mazda RX-2 that stays humble