VIDEO: A cartoon history of the Suzuki Alto and motorcycle business 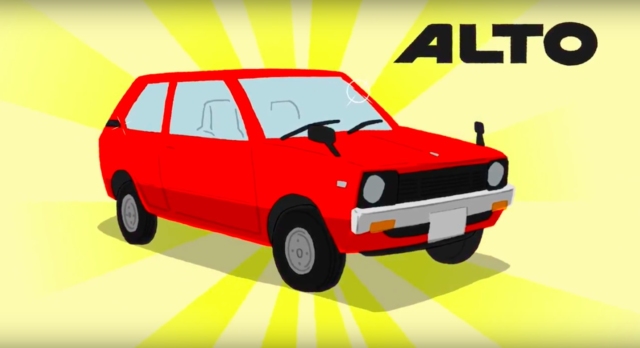 After a brief hiatus, Suzuki is back with two new cartoon videos explaining how the company got where it is today. The first outlines the genesis of the Alto, a revered name in kei cars, and the second explains how a Hamamatsu loom company became one of the world’s top motorcycle companies. Both follow the odd minimalist animation style we’ve seen from other Suzuki history videos in the series. So, if you like your car history in a format suggesting a Saturday morning cartoon with Soviet propaganda-style overtones, these are the videos for you.

The Alto was a game-changing kei car that has seen incredible performance versions and a nameplate revival in 2015. The original came on the heels of the second 1970s oil crisis, and was brought to market at a very competitive rate compared to rival kei cars. According to the video, it was also designed specifically to appeal to female buyers, and ended up becoming a popular second car for women.

However, the real basis of Suzuki’s business is motorcycles. The video details the travails of Shunzo Suzuki, who was fed up with riding his bicycle against strong coastal winds. Thus, the 1952 Suzuki Power Free, a bicycle with a 36cc motor strapped to it, was born. Two years later, launched its first real motorcycle, the Suzuki Colleda CO, and promptly won the Mt Fuji Hillclimb race.

Now we just wish they’d do one about the Cappuccino.

permalink.
This post is filed under: Uncategorized and
tagged: alto, kei, Motorcycle, suzuki.

2 Responses to VIDEO: A cartoon history of the Suzuki Alto and motorcycle business