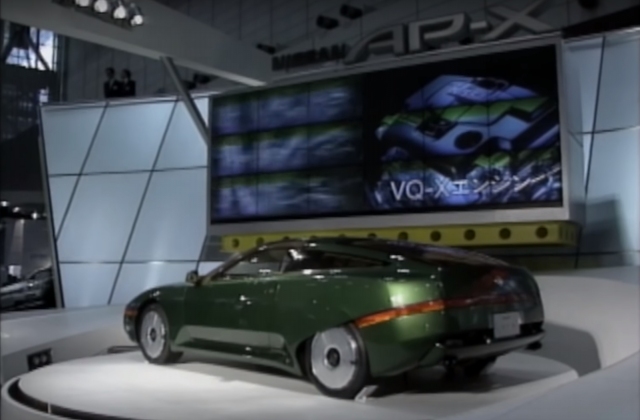 By 1993 Japan was in a deep economic slump. As a result, the mood at the Tokyo Motor Show was a bit more sober, according to this Motorweek video. There were still lots of funky concepts, but fewer were geared towards sport, luxury, and off-roading. However, compared to what’s offered these days the cars were still a bonanza of funkiness and creative design.

Honda and Toyota both showed their visions of the future with a pair of small electric vehicles. The chartreuse pearl Honda EVX had a modish design like a futuristic AMC Pacer with roof-mounted solar panels, while the mint green Toyota EV-50 looked closer to a first-gen RAV4 with aero skirts. Ironically, it was the sleek Mitsubishi ESR that offered a more realistic hybrid drivetrain to bridge the gap between octane and electrons.

Lots of tech shown on these concepts have appeared on production cars some 20 years later. The Honda FSR featured radar braking and adaptive headlights. The Mazda ASV used proximity sensors to alert drivers of nearby cars and pedestrians. Mitsubishi, still full of promise, showed the sporty HSR IV, whose algorithms tailor steering and throttle response to individual tastes.

Where the show really shined, though, were the production vehicles that would fill our streets by the late 90s. From mainstream cars like the second-gen Subaru Legacy and the T200 Celica to far-out niche vehicles like the Toyota Mega Cruiser and Nissan Rasheen, the show had it all.

No one had any idea that the depression would last another decade. Imagination and hope were still on display. Seeing cars like the Isuzu VehiCross and Mitsubishi 3000GT VR-4 Spyder under gleaming lights, when those companies were still willing to take risks, is kind of a gut-punch today, knowing the fate that would befall them. Watching this video today elicits both sadness at the lost potential and amazement at how accurate the tech predictions were.

2 Responses to VIDEO: The post-bubble 1993 Tokyo Motor Show was subdued but still awesome