VIDEO: The 1984 Corolla marked a watershed moment in Toyota history 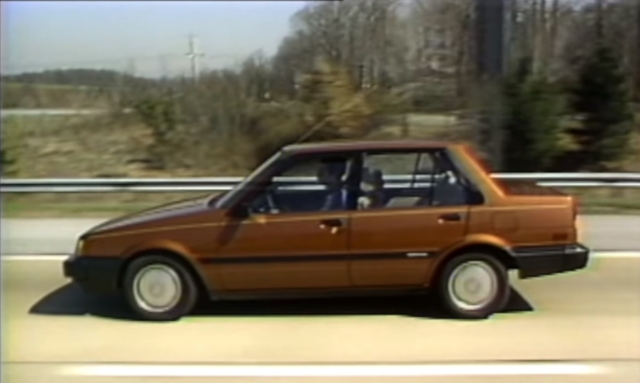 The fifth-generation Corolla marked a paradigm shift in Toyota history. It was the first sign that the old, rear-wheel-drive traditions would soon be wiped clean, replaced with newfangled front-drive successors. It was a risky proposition for Toyota, but it paid off.

As Motorweek points out, by 1984 the Corolla was not only the most popular car in the world for five years running, but largely responsible for making Toyota the number one import company in the US, then the world’s largest car market. Why mess with success?

Turns out, it was more affordable, more efficient, and built in the US. Motorweek had near endless praise for it, giving it kudos for good forward visibility, its voluminous low-loading trunk, and functional seating with excellent  adjustment range and 50/50 split rear.

However, with the benefit of hindsight the E80 has not aged well. The RWD Corollas have a loyal and wide enthusiast following, even if we take the AE86 out of it. On the other hand, in all the years we’ve been doing JNC, we can count on one hand the number of people passionate about the FWD E80 Corolla.

It’s not even a simple matter of front- versus rear-wheel-drive, as plenty of Hondas and Mazdas from the era, and even Toyota’s own Corolla FX, are beloved. Later front-drive Corollas like the E90 and E100 have some dedicated followers. There’s just something about these early E80 Corollas that inspire utter indifference.

Even the styling, which is a natural evolution of the boxy E70, seems several orders of magnitude frumpier due to its transverse engine proportions. If we had to pick one word to describe its design, it would be “generic.” And though previous Corollas weren’t positioned as sporty cars, they could be modified to be such without too much effort. These Corollas seriously lacked sporting potential. Motorweek doesn’t even bother to mention the horsepower figure from its 1.6-liter 4A-C.

It’s not as if it wasn’t a poor performer. Motorweek clocked a 0-60 time of 14.5 seconds. That seems absolutely glacial, but compared favorably to other economy cars of the era. It has a smooth ride. Its 2,240-pound curb weight and smooth-shifting 5-speed manual let it glide by with 36 city, 47 highway mpg. And starting at $6,498 for the base Deluxe trim and $9,547 for a the as-tested LE was a pretty good price point, too.

As it turns out, that was good enough for the majority of car buyers. And as history has shown, it became a bigger hit than ever. The front-drive Corolla became the de facto car for decades, and catapulted itself into the record books as the best-selling nameplate in the world. Shows you how much we know.

Enjoy your Fourth of July weekend, everyone!

permalink.
This post is filed under: Video and
tagged: corolla, e80, toyota.

5 Responses to VIDEO: The 1984 Corolla marked a watershed moment in Toyota history