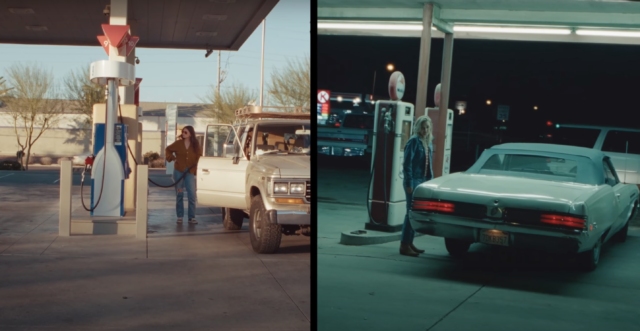 Have you ever noticed that in music videos and commercials, especially ones that feature cross-country road trips, the cars of choice are almost always some big American boat? It’s true there’s a certain romance associated with a classic droptop, but if you were an alien learning Earth culture via this footage you’d think automotive progress stopped in 1976. But now it seems the land yacht has met its match in perceived coolness — a 60-series Toyota Land Cruiser.

If you’re the director of a music video, charged with making a visual tableau of open roads and freedom. You’ve already got a 1968 Buick LeSabre, but need another car for the other half of your country-pop duo. What do you pick?

Well, classic SUVs are the hot ticket right now. A first-gen Bronco would work, but it’s a bear to drive. Maybe an International Harvester Scout, if you can find one that can run reliably for more than 100 miles. A Jeep Grand Wagoneer? Too Skyler White. Well, then the obvious choice is an FJ62 Toyota Land Cruiser, which has an easy-breezy automatic transmission and can go for ages with no issues, yet still keeps that rugged old-truck look. Bingo!

Funnily enough, the lyrics to Aly & AJ’s “Pretty Places” calls out an “old Daytona,” which the Land Cruiser is most definitely not. But it doesn’t rhyme with “would ya,” I guess.

permalink.
This post is filed under: Tune Up and
tagged: J60, land cruiser, toyota.