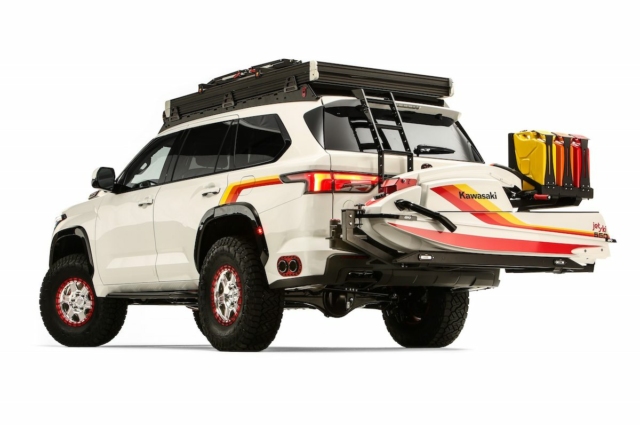 At the SEMA Show Toyota unveiled a colossal number of trucks while announcing yet another line of off-road sub-brands called Trailhunter. Apparently this overlanding thing is really taking off (/s). The coolest among this gaggle of 4x4s is a Sequoia that’s been slathered with the old TRD tricolor on every conceivable surface. It’s almost too much red, orange, and yellow. Ah, who are we kidding? this livery will always be cool.

The truck was built by Westcott Designs based in Phoenix, Arizona and uses a 2023 Sequoia TRD Pro as its base. They added a 3-inch lift, enough exterior lighting illuminate a small village, and a bunch of CNC’ed bits of their own design. then they added the TRD warpaint to a swoosh on the rear quarter panels, the obligatory rooftop tent, and in a subtle outline around the hood decals.

When talking about TRD livery, it’s important to specify which TRD. The famed red, orange, and yellow were a product of TRD USA and are perhaps most appropriate on a big honkin’ USDM truck like the Sequoia. That’s because the colors were originally developed for the Toyota stadium and Baja race trucks campaigned by Ivan “Ironman” Stewart. Racing success immortalized the warpaint as it proliferated to everything from AE86s to GTP racers. 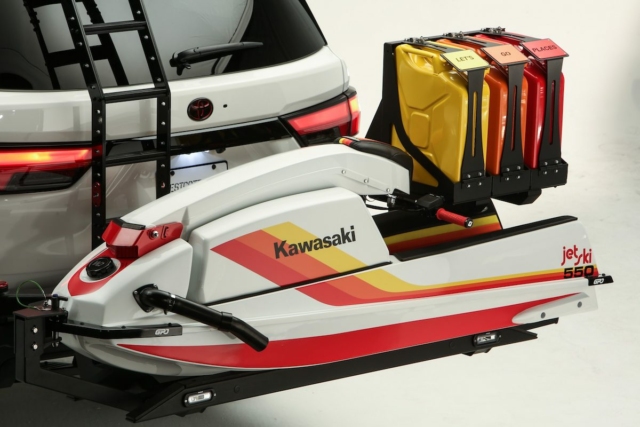 Our favorite usage from this build is not on the truck itself, but the vintage Kawasaki JS550 jet ski. It’s fitting, because both the JS550 and the TRD USA livery came out in 1982. Whether or not that was intentional we don’t know, but let’s pretend it was. The jerry cans are cool too; we just hope no one mistakenly takes the yellow one for diesel. 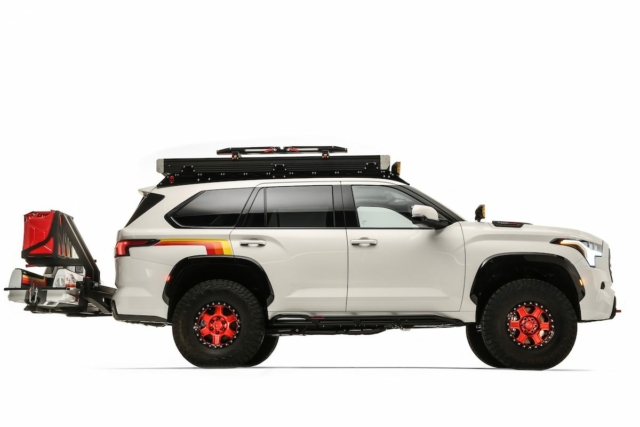 From a purely design perspective, we like this rig the best out of the ridiculous number of trucks Toyota brought to SEMA. It even works out better than the actual TRD tribute cars Toyota’s produced officially, like the 40th Anniversary Edition 4Runner that came out this year. The colors need a white base and don’t look as good over black in our opinion. Also, it seems a bit weird when applied to a very Japanese-style car like the Toyota 86. But, with a thoroughly US-market truck like the Sequoia (or Tacoma, or Tundra) the TRD tricolor will always look right. 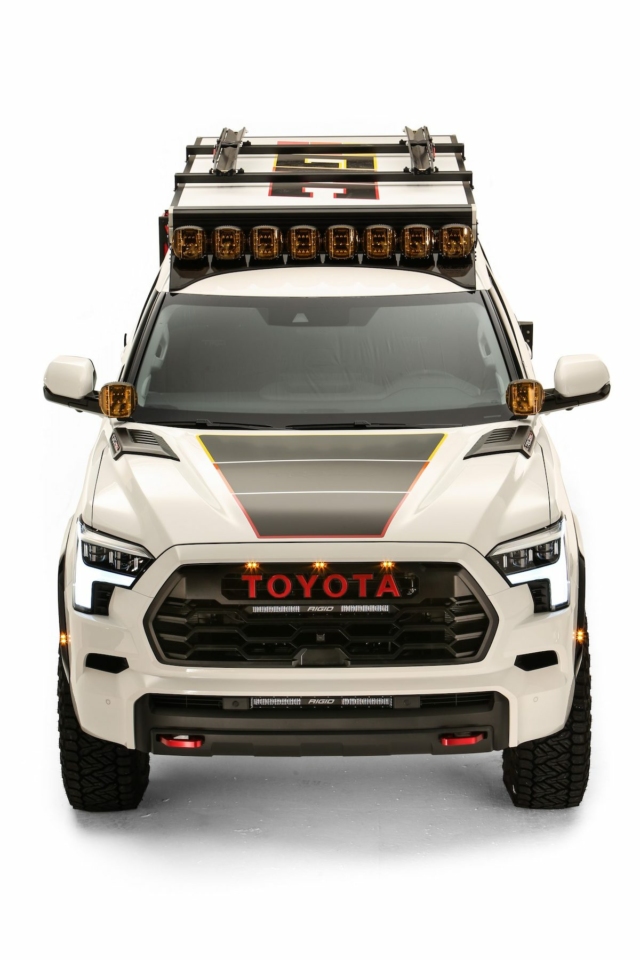 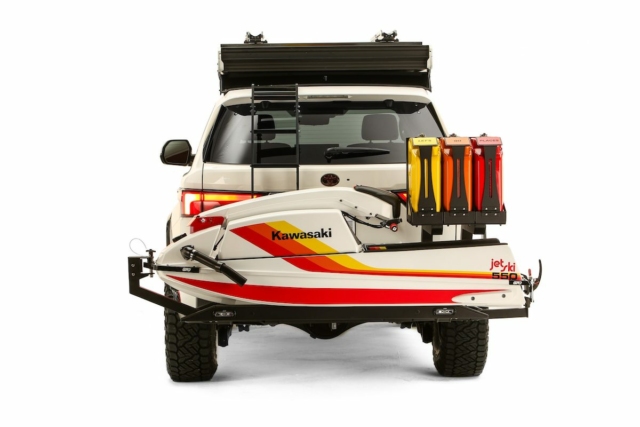 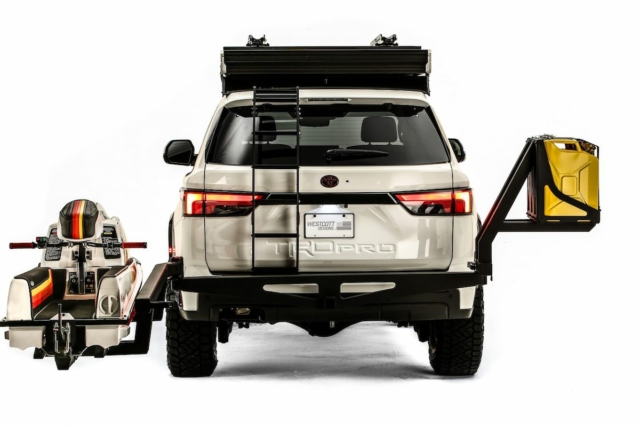 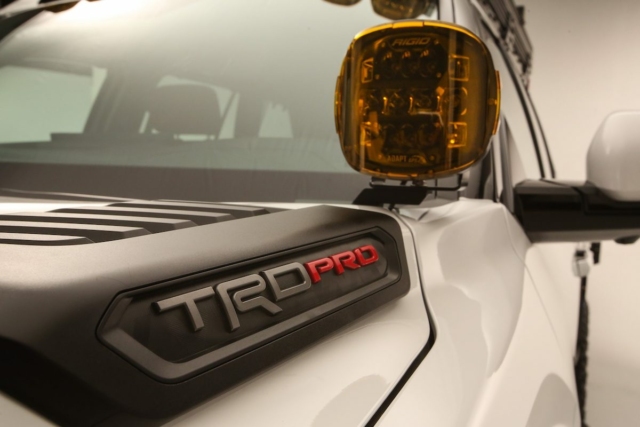 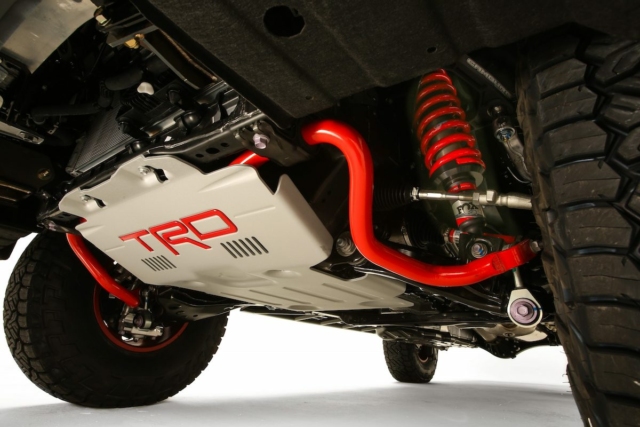 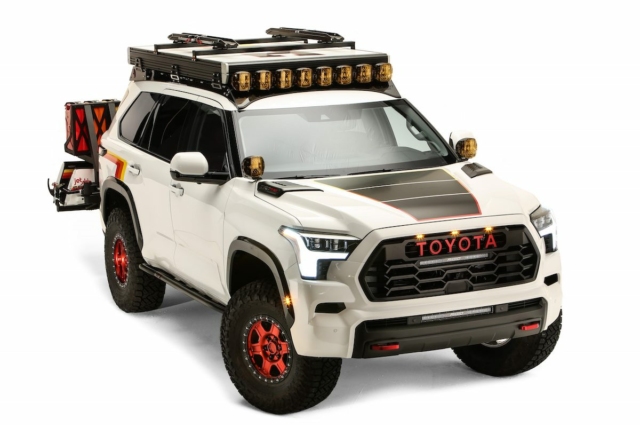 permalink.
This post is filed under: News and
tagged: Sequoia, toyota, trd.