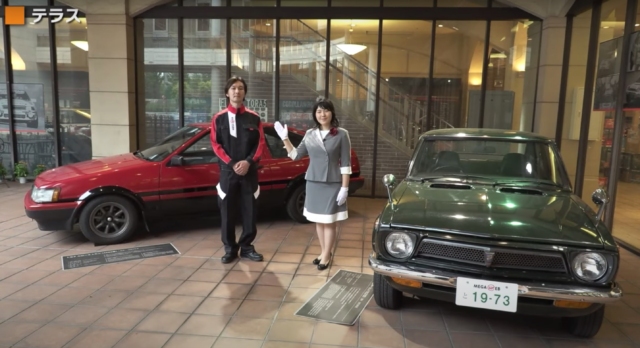 This will be the last week you’ll ever get to visit Toyota’s sprawling MegaWeb gallery in Tokyo. It will close for good on December 31, 2021, after 22 years. That includes not only the main showroom of new cars, but the enthusiast-oriented History Garage located in the adjacent Venus Fort mall. Ironically, Toyota released what is probably the most in-depth video of the History Garage earlier this year.

The nearly 13-minute video acts sort of like a tourism promotion video. It’s in Japanese, but if you turn on subtitles you can read along in English. It begins in the 1960s recreation of Miyuki-dori in the Ginza section of Tokyo, considered to be ground zero for fashion trends back in that era.

Even though we’ve been to MegaWeb many times, the video points out things we never noticed, like the screen depicting popular Japanese clothing styles of the 60s and 70s (guess we were too busy looking at the cars). The guide also points out some of the easter eggs hidden in the street scene, like in the tin-plate Oronine ad.

After that, we see the Restore Pit where cars like Toyota’s 510 Bluebird Coupé were brought back to life, and then the adjacent café and Motorsports Heritage Zone. Closeups follow of cars like the Fiat 500, Toyota Crown hardtop coupe, ST185 Celica WRC car, TE27 Trueno and AE86 Levin.

It seems strange that Toyota would produce a video like this, especially since MegaWeb was mostly closed due to the pandemic between the time the video was made and the time when the facility will shut its doors forever. Perhaps it was meant as a virtual tour to get people through quarantine, or maybe MegaWeb staff themselves didn’t know the decision to close would come just two weeks after the video’s publication. Or, perhaps, it was done for the same reason we at JNC do a lot of what we do. For archival purposes. Come January 1, videos like this will be the only way to see MegaWeb.