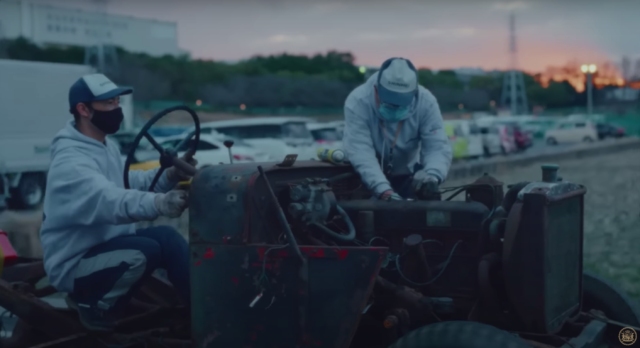 When we last saw the dilapidated but rare Toyota Land Cruiser FJJ fire engine, it was being hauled from an owner’s driveway to a restoration shop. Turns out, that shop is Shinmei, a company that has been responsible for some of the most high-end restorations at the Toyota Automobile Museum. However, even the experts seem  maddened by the some of the Land Cruiser’s challenges.

First, some clarification about the title card, which reads “1951 Land Cruiser Restore and Rebuild”.  We were certain that the FJJ was introduced in 1954, but that “1951” written by Toyota themselves had us doubting ourselves. Now we can see from the thumbnail image that the vehicle is indeed a 1955 FJJ. It’s good to have confirmation of the year, and you can read more about the FJJ itself here.

The video starts with Mr Ishikawa and Mr Nomura looking at the Land Cruiser’s underbelly. They note that the fuel tank brakes are not original, and wonder if there are any remnants of the actual vehicle left. To fully restore the vehicle, they’ll have to separate the body from the chassis, which essentially means discarding a good portion of the rusted sheetmetal.

Impressively, the  3.9-liter straight-six still turns over, though it appears that there is very little compression. The team is able to briefly get the engine running by having a forklift tow the Land Cruiser around the parking lot. In any case, the engine has to come out and the transmission is disassembled. Meanwhile, it looks like they are going to fashion a custom fitting for a newer fuel tank, and are rebuilding most of the body out of new metal.

It’s also a fascinating look at what a top fabrication and engineering shop in Japan looks like on the inside. There are very few facilities with this level of resources, and that alone makes this project one worth following.

permalink.
This post is filed under: Galleries and
tagged: land cruiser, toyota.